An electrifying mix of athletic prowess, mental toughness, sheer brute strength and the occasional bit of biffo, rugby league’s State of Origin series has been wowing sports fans the world over since 1980. Now a new book looks into just what makes one of the world’s greatest sporting contests tick.

In the 21st-century world of team sports, where every move is scrutinised via countless cameras, one event stands out as being as close to the fearsome gladiatorial combat of yore as you can get - rugby league’s State of Origin series between New South Wales and Queensland.

No quarter is given as teammate faces teammate, even brother on brother, the dividing line literally which side of the fence the players were born on (or lived until the age of 13).

Since its inception as a one-off game in 1980, the State of Origin (or “Origin” as it is commonly known) series has grown to be a ratings blockbuster for TV and a massive money spinner for the National Rugby League (NRL).

Now battlelines are drawn every year between “Cane toad” supporters (ie those in the maroon colours of Queensland) and the “Cockroaches” in the blue NSW jerseys.

There is no love lost between either the players on field or the millions of fans during the three-match series.

Sports writer Liam Hauser, whose new book, State of Origin: 35 Years 1980-2014, has just been released, says the rivalry between the two states - and Queenslanders’ resentment over NSW having dominated inter-state league clashes when the format was state of residence rather than state of “origin” - was the driving force in lighting the Origin fire.

“The trouble was that NSW sides often fielded Queenslanders who were lured south to play for Sydney clubs, which generated ample revenue from poker machines (which were illegal in Queensland). Many Queenslanders were therefore beating their own state.”

Taking a lead from the AFL’s State of Origin concept, league officials Ron McAuliffe and Kevin Humphreys suggested a similar format for league.

“It was clear that ‘mate against mate’ was something to behold,” says Liam.

From 1982, the series expanded to its current best-of-three format.

Queenslanders were ecstatic at beating the ‘enemy’ and soon NSW officials, players and fans began to see Origin as the pinnacle of the game too.

And once TV got involved, the series became bigger than Ben Hur as sports fans throughout Australia, and internationally, got a taste of the fierce, at times brutal, games.

The 2014 Origin II game, for example, drew 83,421 fans to Sydney’s ANZ Stadium - but Channel 9’s coverage drew 4.193 million viewers, the highest rating TV show of the year up to that point.

Said the NRL’s head of commercial, Paul Kind: “State of Origin is the best sporting brand in Australia.”

Social media too went bananas over the game; the official NRL, Queensland and NSW Facebook page drew a staggering 8 million unique visitors in one day. In Perth, not a traditional rugby league city, the telecast drew 121,000 viewers while AFL-centric Melbourne had 420,000 viewers.

South Queensland-born Liam, an Origin fan since the early 1990s, knows just what the series means to fans - after all he lives and works deep in “enemy territory” in NSW.

And when the Origin series is in full swing he proudly wears the Maroon colours.  PL

This year’s series kicks off in Sydney on Wednesday, May 27. Game two will be held at the MCG in Melbourne on June 17 (the first match in Victoria since 1997) and the third game - and possible decider - at Brisbane’s Suncorp Stadium on July 8.

1 Arthur Beetson leading the Maroons to victory in the inaugural Origin match in 1980.

2 Steve Mortimer inspiring NSW to its first series win in 1985.

3 The 1991 series, as just two points separated the teams in all three matches.

2 Paul Vautin’s ‘no-names’ (the NRL-Super League “war” meant many first-choice Maroons players were not available for selection) winning the series 3-0 in 1995. 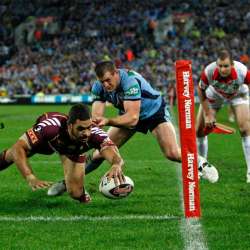 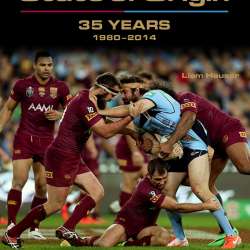 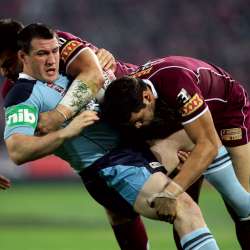 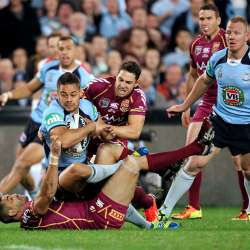