A crazy mix of spectacular aerobatics, sailing savvy and bat-out-of-hell speed, kitesurfing is one of the world's fastest growing sports. In December the world's best kitesurfers will battle it out in a 19km dash from Rottnest to the mainland in the Red Bull Lighthouse to Leighton race.

Anyone who's lived in Perth more than five minutes and loves hitting the beach knows the golden rule of summer - get down there before the sea breeze kicks in.

That breeze can be more like a hurricane, whipping up the waves and sand-blasting all and sundry. Packing up can unravel into an epic battle against the elements (or, in my case, downright impossible as I raise the white flag in an expletive-filled battle to fold one of those beach cabana things back into its pouch; I gave up when a VHS video tape - yes a video tape - of instructions fell onto the sand).

Of course, while my family and other sea-breezephobics beat a strategic retreat back to the calm serenity of the 'burbs another, altogether different, beach animal will be doing the opposite. For them, the breeze is a calling card of extreme, adrenaline-packed thrills - and the stronger and more consistent that wind, the better.

These are the kitesurfers, exponents of one of the world's newest and most spectacular sports – and Perth (and the WA coast in general) offers world-class kitesurfing conditions.

The idea of kite-power goes way, way back (aviation pioneer Samuel Cody developed a man-lifting kite in 1903 and crossed the English Channel in a small collapsible canvas boat powered by a kite) but it wasn't until the 1970s that the idea literally took off. Advances in materials (kevlar and the like) led to more efficient kites. In 1977 Dutchman Gijsbertus Adrianus Panhuise obtained the first kitesurfing patent; one swallow does not a summer make though, and Panhuise's idea didn't get commercial traction.

French brothers Bruno and Dominique Legaignoux, and others, then came up with alternative designs but it was Boeing aerodynamicist Bill Roeseler and his son Cory who, in 1994, invented the KiteSki system of waterskis powered by a two-line kite, that really lit the spark.

Bruno Legaignoux's bow kite design in 2005 was another milestone; bow kites meant you could easily de-power quickly, making the sport much safer for beginners.

Today the sport has morphed into a score of different styles; wave riding, freestyle, wakestyle, course racing and jumping to name but a few. Kits are ultra-light, ultra-strong and ultra-manouverable and can have experienced kitesurfers blasting across - and above - the water at phenomenal speeds (Frenchman Alex Caizergues holds the world record at 104km/h).

Internationally, kitesurfing is going gangbusters and WA is ground zero for one of the world's toughest races - the Red Bull Lighthouse to Leighton event. The 19km race starts at Phillip Point, Rottnest Island, and then it's a mad dash across the Indian Ocean to the finish line at Leighton Beach.

Defending champion, British teenager Olly Bridge, will be aiming to go back-to-back against 114 elite rivals - including his mum, Stephanie, a former world champion in the sport who took out the women's title last year.

Olly, 18, a three-time European champion, blitzed the distance in just 22 minutes and seven seconds last year and will be out to better that, conditions permitting.

It's no surprise Olly, at such a relatively young age, is a kitesurfing gun; he grew up in a sailing-mad family, with Stephanie and her husband Eric running a dinghy sailing school in the UK.

"When Olly and his two younger brothers were born they came to work every day and naturally they learned to sail before they walked. Alongside the sailing was flying land kites and buggying. Olly progressed to the water at the age of 10 or 11 while his younger brothers followed. The three boys were collectively known as The Bridgelets and for their time were young kids ripping to a really high level," says Stephanie.

Olly, and his middle brother Guy, are now faster than their mum on the water.

"There was a time in the beginning when Olly was getting into racing when I would slow down, but that did not last very long. It is very good for me to train with the boys and now we have a system where they have to catch me. We kite most evenings after work out in the bay where we live; even if it's only an hour it's what it takes to be world-class," she says.

With youngest son Tom, 14, now under Red Bull's "undercover athlete" program and concentrating on kitesurfing freestyle, it's safe to assume the Bridge family dynasty will be collecting trophies for a long time to come.

And as Stephanie says, kitesurfing is a sport that not only is a fantastic workout on the water, but literally opens up a whole new world of adventure.

"There are many amazing experiences; sunset sessions, kitesurfing among incredible clear coral waters like the Caribbean, kitesurfing with dolphins and in the moonlight. I was invited to Iceland to teach kitesurfing and this was a unique experience - to kitesurf at 3AM in the daylight with snow all around on a beautiful fjord. Every day is different when you kite, especially in the UK, and this also makes for special memories," she says.

Kitesurfing fanatic and race director Tim Turner came up with the Lighthouse to Leighton race concept while he was setting, in Namibia, the Australian kite speed record over 500m.

"I could see the potential for creating a one-way drag race from Rotto back to the mainland. I tested the Gage Roads course who had a boat to escort me over and it worked perfectly. The next steps were to get the approvals and Red Bull came to the party and really brought some gravitas to the table," says Tim, who adds that without approval from the Department of Transport (the race crosses busy shipping lanes), the Lighthouse to Leighton would not be possible.

"It is first past the post wins, with the quickest time getting faster every year it would seem. Alex Caizergues won the first edition in 2010 (24 minutes 35 seconds) and last year Olly Bridge bettered that time to win in 22'07''.  The 19km is just the perfect distance to test your stamina, speed and skill set; go too fast and you'll likely crash, too slow and, well, you just won't be competitive," says Tim.

And while the Lighthouse to Leighton is for the kitesurf racing elite, Tim says it's a sport that is accessible to all.

"Get lessons first from an instructor. There are many great and experienced professionals who can teach you the right way to set up your equipment and competently learn kiting.

"You can have so much fun - there is a bit to learn before you are skimming across the ocean but you'll never forget the first time you get up and likely you'll be hooked for life."

A great place to start for anyone wanting to get involved in kitesurfing, or for experienced kitesurfers new to Western Australia, is the West Australian Kite Surfing Association, better known by its memorable acronym WAKSA.

The Red Bull Lighthouse to Leighton race will be held on Saturday, December 5. Visit lighthouse2leighton.com.au for more information. 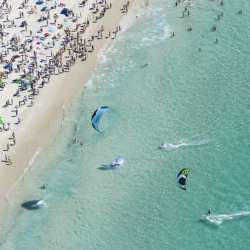