f the Melbourne Cup is just too much these days why not book a spot at an altogether more civilised racing meet at Warrnambool's historic three-day event on the south west coast of Victoria.

It’s a packed train that could be going to the Melbourne Cup except the locomotive is heading in the opposite direction and patrons are warmed by winter coats and comfortable gloves. They’re off to Warrnambool’s May races, a three-day institution where the wind may be bitter but the spirit couldn’t be better.

It’s a journey I’m familiar with, having spent a semester of my teenage years in the south west Victorian sea-side town.

Since my last trip the old cabins had been replaced by rows of seats, but the conversation is as boisterous as what I remember as we rattle down to the place they call The ‘Bool.

“We reckon it’ll be warm in the bar!” roars one wag, pointing to that notoriously piercing breeze that awaits once trackside.

“What happens on this trip stays on this trip,” whispers another lad to the group across the aisle, hoping for some mischief.

“You’ll be swapping phone numbers in a minute,” remarks a third.

Laughs all round. It’s a pattern of what’s to come: happy, smiling people.

With every minute we’re further away from Melbourne the stress of daily life abates a fraction more.

For 160 years they have gathered at Warrnambool for jumps racing, the carnival growing to become the nation’s biggest rural meeting. It’s such a staple that the crescendo of the Tuesday-through-Thursday affair, the running of the Grand Annual Steeple, warrants a public holiday for locals.

First held in 1872, no race in Australia is longer at an epic 5500 metres, and none in the world has more jumps than the 33 fences scattered along a course that includes a pair of road crossings to an adjoining paddock next door to the track proper.

It can be chaotic, but with $1.7 million on offer in prizemoney across the 29 races it’s big business as well. There are flashes of that history everywhere you poke, too.

Most significantly, in 1894 it was at the Grand Annual that Banjo Patterson’s girlfriend first heard the tune played by a marching band that would later morph into Waltzing Matilda. Of course, there’s no avoiding that jumps racing is a controversial enterprise, outlawed in some states but still part of the offering in Victoria, especially this one week in May.

But despite healthy protester numbers, it lives on as Warrnambool’s centrepiece. In turn, the stature of the week readily draws racing royalty.

Champion trainer Gai Waterhouse told me that after three consecutive visits she would now “definitely keep coming. “I’ve thoroughly enjoy it here, it’s relaxed, very much; a racing person’s carnival,” she said, adding it was like “racing in Ireland and northern parts of England.”

After losing money on the feature race of the opening day, I took no encouragement to get out of the elements and into my digs.

They were to be found at the Cally Hotel, an old-fashioned drinker’s pub, the family-owned operation were in the midst of a major renovation, but determined not to lose anything in character. How can you not trust a pub with their footy tipping ladder on the wall and handles on their pots of beer?

It was time to explore.

When the sun is out, Warrnambool’s natural charm lays at edge of the idyllic Lady Bay; fishing off the imposing Breakwater, watching for whales, and getting a sense of why it is part of the Shipwreck Coast when strolling down Thunder Point. But it’s an entirely different proposition when cold.

This is the city centre’s time to flourish. Most of the action is found in close proximity to the main Leibig Street drag; my destination to sample what’s touted to me as the best eatery in town, Nonna Casalinga’s.

Nonna’s is empty when I enter, but not for long as revellers pile in, a winning race owner given a rousing applause from the staff who knew their clientele well. The wine list is listed along the wall, the staff happy to pace me through it and the specials before leaving me alone with my book in the corner.

Battered oysters were the perfect way to start alongside a pumpkin ravioli before launching into main of chicken that was carefully laid out on the plate within a healthy, crunchy salad. I undid my good work at dessert by indulging in custard and cognac, but this was mostly because I didn’t much fancy leaving.

From start to end with a full belly and couple of glasses of wine, I was more than happy to part with $100 of my hard earned. Strategically retiring for an early night was sound, for it gave me the chance to tuck into a pair of cafes, and a chance to pretty myself up, before returning to the track for day two.

Despite not being the world’s most hirsute lad, there are few things I enjoy more than leaning my neck back for a straight-razor wet shave. Birds and Fellas barber shop I was told would sort me out, and I immediately knew it was my kind of place when Metronomy was the first band I heard on the speakers upon entering.

There’s an intimacy to the wet shave; from the application of delicate the hot towel to feeling the warmth of eachother’s breath when your faces are that close; not to mention the potentially lethal weapon being thrashed about so close to your jugular.

The woman working on my face couldn’t have been kinder with her advice; proud of her town, but also keen herself to get to the big smoke. A common theme. Feeling tidy, Bohemia was next stop for some baked beans that came steaming off the plate.

I regretted not being there for dinner too where paella cakes with chicken, prawn and chorizo sung off the menu at me in the perfect collision of my passions. Bright Bird is renowned for making the best cup of coffee in the centre of town, and didn’t disappoint, albeit after a decent old wait that highlighted its popularity.

In any case, I now felt now ready to face the track. Before heading down for this trip I reflected on my brief Warrnambool school days and they were in no small part defined by the rapport struck up with one teacher. He was a lawyer, but had returned home to teach and I was in his initial intake.

He liked normal things like football and taking the piss and was more a mate than a figure of authority. I’d googled him before going down there only to find out he was now a horse trainer, and hoped to run into him. Within ten minutes of entering the member’s enclosure this was exactly what happened; he had a nag running.

I stuck out my hand, introduced myself, provided a bit of history and context. But nothing. He disposition was polite, but face blank. I was gutted he didn’t remember me, but that didn’t last for long when I broke with the pattern of a lifetime by backing a winner first up.

Every inch of the venue – from the grass banks to the betting rings to the grandstands - were far busier on the middle day, where the Group One Warrnambool Cup featured. In the mounting yard, I spotted leading racing personality John “Dr Turf” Rothfield, a man who has been back to Warrnambool, by his count around 30 times and says he has a love of the week for it reminds of him what racing “used to be”.

“There is no atmosphere at the track anymore, it is all ‘race, race, race, race’; people are there just, not for the love of racing, whereas, I reckon here, these are all racing people,” he explained to me.

“I was thinking the other day, and hand on my heart, I’ve never seen a fight here. Do you see drunks rolling around here? I’m not saying that we’re all do-gooders, but there is something about this carnival; people are here to enjoy themselves.

“The way the Spring is in Melbourne and now they are doing the Championships in Sydney, they are prompting it as a party and trendy and dress up and all that stuff. But here it is about racing, and everything else is an added bonus.” Succumbing again to the conditions after the main race was run and won, I ventured back up to a bank of minibuses that take patrons free of charge to town, with the hope that they’ll stop in at their pub on the way back for a quick pot or ten.

On this occasion, I hopped on the RSL bus, driven by a Vietnam veteran who volunteers his time to “give something back.” It’s that kind of town. Next: Kermonds. Here is as much an institution in town as the races, a shop front not shifting since the 1950s boasting a hamburger routinely named as one of the best in country, even getting a gong in a world top 50 list. It was so packed that the contents could barely be contained within the bun, just what was required to again warm up the body.

It was the ideal stomach lining for a bit of an impromptu pub crawl as the busses slowly filled up the boozers. Here’s my form guide: Western – renovated, craft beers aplenty, big white walls. A nice investment of time. Royal – polar opposite of the Western, a Paul Kelly cover band and $3 pot at happy hour. Favoured by punters. Vic – another drinkers’ favourite, racing on TV through the night, but mercifully no pokies.

Cosy and friendly, have it in your trifecta. Whalers – a $10 entry fee? Spiv magnet. Leave to others.

Warrambool – establishment favourite, every wall covered in iconic photography of the area. A sense of history, hard to ignore.

The multi-stop early evening had me ready for another weighty feed, and I needed no encouragement to slip over to another restaurant that vies for the tag as best in town, The Pickled Pig. Instant credibility is earned by the head chef having learned his craft as the Melbourne’s esteemed Press Club.

He described to me his was to give locals the chance to eat off a city menu without having to drive three hours for the experience. In my case, an elaborate tasting menu coming in at under $100 is the perfect option, with so many treats it would be rude to try and capture them all in a sentence. In short: just go. After couple of lovely days, the biggest of them all had arrived: the 2015 Grand Annual. Nearly triple the numbers from the previous day poured through the gates (15,000 in total) making their most of the day off.

The car parks are full of picnics here just as they are at Flemington in November, hospitality tents packed all the way down the straight. It rained, but John Green, Chief Executive of the Warrnambool Racing Club, explains with a smile that the “little bit of precipitation” is “part and parcel of what is the Warrnambool May Racing Carnival.

“Warrnambool has stayed true to its roots,” he goes on. “That is, this is primarily a racing festival that showcases and caters for a broad cross section of the industry.”

The excitement on the terraces as favourite Regina Coeli crossed the line first was palpable; a win for the people, to end a carnival that’s unmistakably about the people. Returning home is hard. Maybe this is how life should be all the time: laughing more, engaging our best selves?

Or perhaps this is what makes this special: the elimination of cynicism and the suspension of reality, if ever briefly. Only a train trip away. 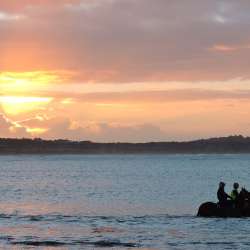 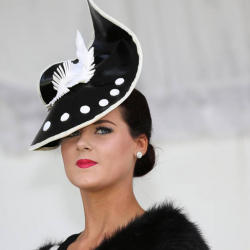 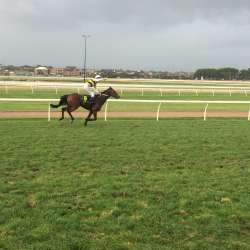