Daniel Ricciardo may live in Monaco these days, but the Perth-born champ is still the local hero we'll all be cheering at the challenging night circuit of the Singpaore Grand Prix in September

Daniel Ricciardo has made the transition to Formula One’s world champion team look relatively simple this season with a series of eye-catching performances for Red Bull Racing - including, of course, his win at the Canadian GP - but there was a time when a winning streak at F1 level didn’t seem quite so straightforward.

It was 2011 and, in just his sixth F1 race, Ricciardo took to the streets of Singapore for his first Grand Prix under lights in the spectacular city-state.

It wasn’t an experience he was likely to forget for some time.

Two hours and a lowly 19th-place finish for the backmarker HRT squad later, the young West Australian realised just how brutal F1 can be.

“I figured that Malaysia would be tougher because it’s in the middle of the day and it’s a higher-speed circuit so it would be harder on the neck muscles, but Singapore was a sleeper,” Ricciardo remembers.

“I just wasn’t prepared for it. It was my sixth race and I wasn’t ready for it to be that hot and that hard and, from the start to the end of that race I lost 2.5 kilos. I can laugh about it now - I definitely recommend Formula One to someone who’s on a weight-loss program.”

Ricciardo is older and certainly wiser these days and, with personal trainer and physio Queenslander Stuart Smith in tow, nothing is left to chance.

As Formula One prepares to head to Singapore in September for the seventh instalment of what has become one of the most prestigious Grands Prix on the 19-race schedule, the Duncraig racer's preparation for a meet he describes as “the toughest on the calendar” is planned meticulously.

“I do some heat chamber training in the build-up to the race, which is basically sitting on a bike in a sauna and trying to acclimatise to getting your cardio working in the heat,” Ricciardo says.

“I start to hydrate early in the week leading in – during the day I’ll drink probably four litres of a mix of water and isotonic drinks – and you have to eat more than you think you have to in that heat.

“It’s not until you drive a heavy-braking circuit that you realise how much energy hitting the brake pedal that hard and that number of times every lap for two hours takes out of you.”

In a sport where money, glitz and glamour aren’t in short supply, the Singapore GP has been a stand-out since its inception in 2008 as a race that has become known as ‘the Monaco of the East’.

The Marina Bay circuit itself – a winding, twisty 23-corner layout that takes in many of Singapore’s landmarks – is spectacular enough, but add an 8pm start time with a circuit lit up by 1,500 lighting projectors powered by 110,000 metres of cables and you can see why Singapore has become a race every driver wants to win.

Ricciardo is no exception and the 25-year-old is set to make his Singapore debut for the team that has been the benchmark at the venue in recent times.

Reigning world champion Sebastian Vettel has won the past three Singapore races for Red Bull and, while ninth in 2012 for Scuderia Toro Rosso is Ricciardo’s best result in three Singapore outings, he’s optimistic he can light up the night this September.

The F1 calendar also features night races in Bahrain and Abu Dhabi, but neither replicates the intensity, requires the focus or offers the sheer sensory overload of racing at night on the floodlight streets of a steamy, pulsating city like Singapore.

It’s an immense challenge, one that Ricciardo can’t wait to embrace once more.

“Driving in daylight, you look ahead more and you can see the next corner, whereas at night the corners just seem to come at you faster,” he says.

“It’s different, but it’s hard to say how it’s different to driving on a really sunny day. I know it feels, like you go faster at night.

"Hopefully that’s the case for me this year.” 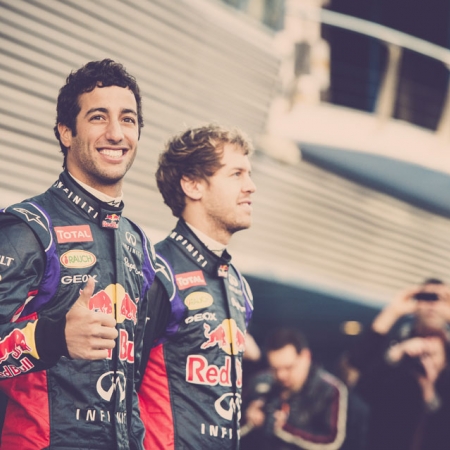