Dermott Brereton shows no sign of taming his trademark competitive edge when Myles, 10, finds out what makes the legendary ex-Hawk tick these days as one of Fox Footy's star commentators

Myles: Would you say that you're primarily known for your aggressive style of play?

Dermott: When people think of my name, I'd say yes, they tend to think of that being my style of play.

Myles: Do you regret that?

Myles: How did you get your nickname, 'The Kid'?

Dermott: I was 16 years old and was sitting on the bench in a reserves game for Hawthorne, and the coach (Des Meagher) didn't know my name. He said to one of the other players, 'come on, get a kick or we'll put that kid on', pointing at me. I went on to have a game and it went pretty well - it was the first time I played as a man rather than a boy.

Myles: What would you say to somebody who called you a sniper?

Dermott: I'd think that they didn't know a great deal about footy.

Myles: Why did you kiss Billy Duckworth in 1988?

Dermott: Well he's very good looking. I thought he was going to head butt me actually so I just grabbed him instead. (Ed: Brereton kissed Duckworth while Jason Dunstall lined up for goal. Dunstall kicked the goal but due to Brereton's kiss, the goal was disallowed.)

Myles: Did you mind when Kevin Sheedy called you 'just another mad Irishman' after that incident?

Dermott: If you think about it, when he said 'just another mad Irishman', he was actually talking about himself too so, no, I didn't find it offensive. Water off a duck's back.

Myles: How did you feel when Mark Yeates shirtfronted you?

Dermott:At the time I wanted to go and find him. I ended up with two broken ribs and a tear in the kidney. The worst thing was the doctor advised me not to drink, so I waited til midnight to have one.

Myles: Which club did you play the roughest for and which one was your favourite?

Dermott: I played my best and roughest footy at Hawthorne, but also got suspended twice at Sydney for 14 weeks. Although I'm not officially involved with the Hawks anymore, I was on the board for 10 years, overlapping with Jason Dunstall. If they ever ask me to do anything, like an advertisement or a function, I'll always do it, no problem.

Dermott: In 2004 Essendon at the time were a much better team than us, much tougher and more effective. I believed that Mark Johnston deliberately slammed Robbie Campbell's head into the ground so when we went downstairs with Peter Schwabb (the coach), I spoke to a couple of the boys and told them to be very mean and aggressive in the next quarter, and to make Mark's game terrible. The result was that all the boys got involved and there was a record amount of fines from that match. Up until then, they'd beaten us 10 times in a row, by 10 goals. The next game they beat us by three points, and then we beat them for the next nine games in a row.

Myles: How did you get injured during your stint on Dancing on Ice in 2006?

Dermott: I picked up my partner and was meant to throw her but just as I did my bicep exploded. I've now got a screw in the top of my shoulder and bolts in my arm - all because I didn't warm up properly.

Myles: Who was the hardest player you ever went up against?

Myles: Who was your childhood hero?

Dermott: Phil Carman, who played for Collingwood and then went on to Melbourne, Essendon and North Melbourne.

Myles: Would you still like to play in today's game?

Dermott: I'd enjoy playing the game in this day and age - I'd dominate it.

Dermott: It's been a good season so far - the basic principals apply that the weak will get stronger, like GWS and Gold Coast who have drawn all the talent to their pool of players. I'm not convinced the Eagles will win the flag. We haven't seen them up against a strong team yet (at the time of going to press). Let's see what happens then.

Myles: Who was the funniest Hawk?

Dermott: That's a toss up between two guys - Robert 'Dipper' DiPierdomenico and my very best mate, Chris Wittman (98 games and two premierships). He's very dead pan, keeps a straight face while all around him are cracking up.

Myles: Who do you think from the current players would make it in the future as a presenter like you?

Dermott:You need to have something about you to make it on TV, a bit of charisma. I could see Brian Lake (Hawthorn, Norm Smith medallist) presenting - he's quirky, a bit weird and entertaining. Maybe Dean Cox or Robert Murphy too.

Myles: Have you apologised to Chris Lewis?

Dermott: In 1991 I racially taunted Chris and yes I have apologised for that. As a society we've learned more tolerance and learned the correct way of behaving towards people who are from different backgrounds to our own. Chris is a fantastic fella and very funny. I'm still waiting for those to apologise to me and Dipper though.

Myles: Would you recommend kids coming up through Auskick to copy your rough style of play?

Dermott: Not the young juniors but for those 15 and above, yes I would as long as they play within the rules. You used to be able to bump players within five metres of the ball but now if you instigate the bump, the onus is on you to miss their head. In my day and age, I played within the rules.

Myles: What's your new show, Ed and Derm's Big Week In Footy, all about?

Dermott: We cover off every game during the week and chat about all the stuff we loved as we grew up, what the marks of the week were, the best goals. We also talk about other codes too.

Myles: Do you get nervous before you go on air?

Dermott: I get nervous for the first 10 seconds on the show but once I've got the first sentence out, I'm up and running and it's OK.

Myles: What do you do in your spare time?

Dermott: I love surfing, working on my house and kicking the ball around with my son, Devlin (14).  PL

Catch Dermott and Eddie McGuire (below) on Sundays on Ed and Derms' Footy Show on Fox Footy at 7.30pm (AEST). 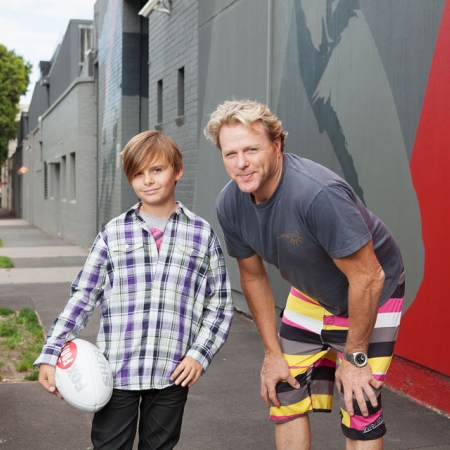 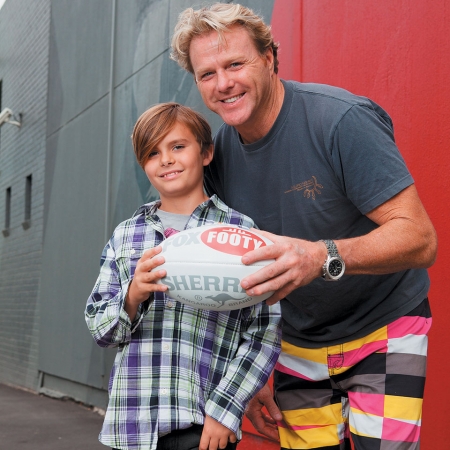 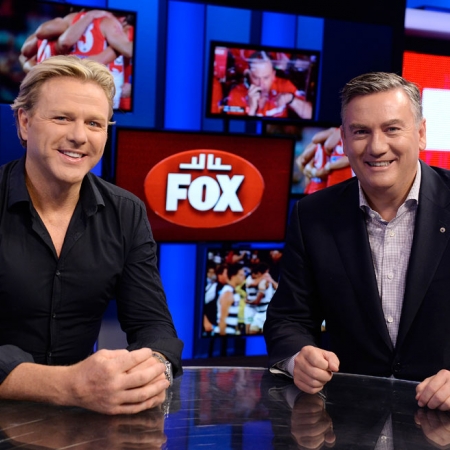