The Harry Potter™ Film Concert Series returns to Perth Convention and Exhibition Centre with Harry Potter and the Chamber of Secrets™, the second film in the Harry Potter franchise. WASO will perform John Williams’ unforgettable score while the film plays in high-definition on a 40-foot screen.

I ask David Cotgreave, Production and Technical Manager, WASO, what special skills are required to bring such a beloved movie to life with a full orchestra playing along.

GM: It’s a big responsibility to put together a concert for such a beloved movie and the franchise as a whole – what are the main challenges?

DC: It’s a huge responsibility when we’re presenting something that is very dear to all of the audience. There’s several challenges but one of the main challenges was to find a venue that suited both the film and the orchestra so we can give the audience the best possible experience of both. We’ve done many movie/orchestra concerts over the years (Lord of the Rings, Raiders, Back to the Future to name a few) and found that the Riverside Theatre at the PCEC works very well because of the width of the stage and the relationship of the auditorium to the screen and orchestra. There’s not a bad seat in the house. The stage had to be big enough to hold an 85 piece orchestra (and in the case of the Lord of the Rings a 120 strong chorus as well) and the largest movie screen I can lay my hands on. The screen we use is over 14.5m wide. We fit so much onto the stage that there’s literally only a few cm leeway up or down before the musicians start hitting their heads on the bottom of the screen or people up the back start losing parts of the image.

GM: How long does it take to prepare for the show?

DC: Preproduction starts over eighteen months before the concert. When the show is being considered for the program I’ll receive a technical rider (list of equipment and specification) for the show and I’ll have to review them and then ensure that the show will fit into the venue we’re considering, that we can get the gear in WA and create a budget. To achieve this I’ll create a draft production schedule and drawing to ensure that we have enough time to set up the show and it will fit.

Over the coming months I’ll get quotes in for AV, Sound, Lighting, synths and ensure my regular team are available to do the show.

GM: How do you rehearse – with the movie playing to ensure the timing is right?

DC: We have three rehearsals so we can’t waste a second. The scores were written to be recorded in sections rather than played from start to finish so the orchestra has to work incredibly hard to rehearse all of the music and then perform it in the space of three days.

I’m probably giving away a trade secret here but the solution to keeping everyone in time is part tech and just old fashioned musicianship. The Conductor has a screen in front of them that runs the movie in sync with the main screen but has a series of visual indicators that count the conductor in for each cue and then it’s over to the Conductor to keep everything in time.

GM: What’s your favourite part of the performance?

DC: This is a tough one because there’s so much to like. I love the movies, the effort that the audience put into their costumes, the audience participation, the buzz I get when I’m about to set the show rolling but most of all it has to be the music. I’ve been listening to John Williams since I was a teenager so to hear the music being played live to such a great film has to be my favourite part of the performance.

GM: What can people expect by coming along to the show?

DC: They can expect a truly unique live performance experience, this isn’t the kind of show where you sit quietly in a darkened room to watch a movie it’s a live concert so the music is front and centre.  The audience will either get to see Harry Potter on the big screen again or this will be there first time having only seen it on their TV at home. They’ll see people dressed up as their favourite Harry Potter characters and hopefully they’ll take the opportunity to dress up themselves. There are subtitles so that for the hearing impaired or the few moments when the music might overshadow the dialogue so the audience can still understand what is going on. Audience participation is encouraged and, from our experience earlier this year, is wholeheartedly embraced by the audience. Although I seem to remember one patron who insisted on spouting every word of dialogue which stretched the friendship of people around them a bit.

GM: Harry or Hermione, wizard or muggle – which side are you on?

DC: I think I’m more of a Ron Weasley kind of guy but with Muggle blood in me. I like to work in the background to create an environment so that others can shine. 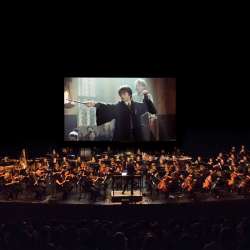