No animal on the planet has been demonised more than the shark; the mere mention of the word sends involuntary shivers up the spine of most people. Yet, while humans slaughter an estimated 100 million sharks each year, the shark is responsible for very few human casualties in the scheme of things. With this striking new volume, American photographer Michael Muller goes into bat for a creature that has, in one form or the other, survived 400 million years on earth - but is fast headed for extinction unless there is a major shift in mankind’s attitude. Muller had something of an epiphany while cage diving with great whites off Mexico; locking eyes with one sparked in him an urge to use his photography skills to help dispel the myths about sharks. And in Sharks, Muller truly gets up close and personal with all kinds of sharks in their own domain; his patented underwater strobe light system giving his photos a unique, studio-quality dimension in the wild. 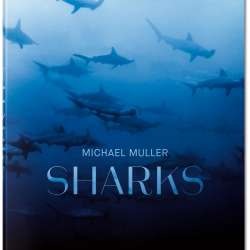