If you've got a lamp, give it a good rub it and wish for tickets to one of the best shows of the year.

I look around the auditorium, and to a man and woman, the entire audience is on their feet, cheering, whistling, clapping with hands above their heads. Not unusual, you might think, except this isn't at the end of the opening night performance of Disney's Aladdin. It's half way through after we've all just witnessed the tour de force which is Genie's Friend Like Me showstopper.

It's a glorious high point in a show with so many that it puts the idea of theatre being 'old fashioned entertainment' out to pasture. The thrill of witnessing and ensemble cast in full flight, effortlessly performing such a technically complex, musically enjoyable set piece is unforgettable and worth leaving the house for alone.

From the moment the curtain raises on this technicolour imagining of old Agrabah, the audience is transported to a magical experience that puts even high-tech TV shows to shame.

We all know the Aladdin tale, the 100 and 1 Nights story retold by Disney in a much-loved animated version in 1992 and brought to life on a rainy night in Perth.

Eye-popping sets seamlessly move between Agrabah and the desert, Jasmine's palace and Aladdin's cruddy rooftop residence. Suspension of disbelief is total and we all willingly buy into this fantastical story of the diamond in the rough making good on his promise to live up to his dead mother's expectations (a new song - Proud Of Your Boy - cut from the original movie, which runs like a golden thread through this production).

Central to the whole show is Aladdin himself, and the casting of WAAPA's Ainsley Melham is perfection. Boyishly handsome with a soaring voice and cheeky demeanour, he's the embodiment of the loveable street rat who falls for a princess and in the process, finds out the meaning of being true to yourself.

This is an actor over-endowed with talent - a true triple threat, Aladdin can sing, dance like a dream and act to the point that in what is essentially a glorious confection of fairytale memes, we all want him to succeed, get his girl and fly off on that magic carpet into the moonlight.

And that girl, Jasmine (Shubshri Kandiah) is worth all the effort. Looking as if she's stepped straight off the Disney animator's page and come to life, this Jasmine is going to inspire so many dress-up days with her long flowing inky black hair and gorgeous costumes. The chemistry between the pair is palpable and goes a long way towards the success of this production. But of course, Aladdin is really more than just a love story; it's also all about the bromance between the street boy and his magical saviour - Genie.

And what a Genie he is.

Gareth Jacobs opens the show in full Genie regalia; purple balloon pants, bejewelled jacket and eyebrows higher than skyscrapers, he's got an onstage personality that demands you sit up and pay attention. The success of the show rests on these well-padded shoulders and this Genie does not disappoint.

It's some achievement to step into Robin Williams' legendary Genie slippers and make the part his own, but Jacobs is more than up to the task. It's also quite something that after opening the show we don't see Genie again until that showstopping turn in the Cave of Wonders but, like the ethereal creature he is, his presence hangs, willo-the-wisp-like, over proceedings.

When we finally witness this truly fantastical interpretation of Genie's Big Moment, it's one of musical theatre's great moments. Inventive, surprising, accomplished (I particularly loved the ensemble tap section when even Genie got to show off his surprisingly nimble hot-shoe shuffle) and above all, fun.

Although there may be a love story and a bromance at the heart of Aladdin, of course there's so much more. There are the three endearingly nutty mates of Aladdin who have heaps of fun with one of the best knockabout numbers of the night, evil Jafar (Adam Murphy), hamming it up as if his life depended on it with sidekick Iago (Aljin Abella) and George Henare as the Sultan.

And then there's those costumes - scores of them - and the astonishing quick changes throughout which make you think that there must be literally a cast of hundreds.

If Friend Like Me is all knockabout bravado, then A Whole New World is its counterpoint and no less effective because of that. Aladdin and Jasmine hop onto the magic carpet and recreate one of the silver screens most iconic moments, swopping and skimming the ocean as the two young lovers discover the elation of freedom. How do they achieve this on stage? I literally have no idea but that carpet really does appear to fly.

Aladdin delivers on its promise - conjuring up wonders before our eyes, making us believe, if just for a few hours, that dreams really do come true.

An unmissable magical of eastern promise in the west. 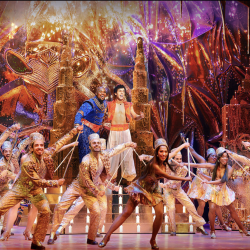 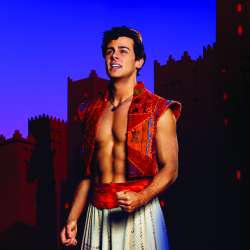 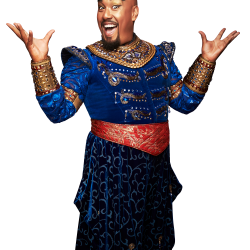 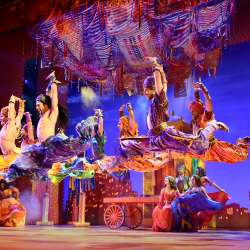