U2 is one of a handful of bands with an album that remains relevant across generations and a part of that may be to do with the unique way U2 conveys their spirituality through rock music. On Wednesday November 27, inside the Optus Cathedral, Perth fans of the Irish rockers gave praise where it was certainly due.

The 50,000 fans started to gather around and flock inside the sunny, riverside venue with the sound of Noel Gallagher's High-Flying Birds starting to move from their lesser known songs to the popular Oasis tracks everyone loves.

Three decades since The Joshua Tree was released, and one decade since the last Australia tour meant that the atmosphere was one of excited anticipation. No one was thinking of the few public relations hiccups in recent years; we all remember the unsolicited iTunes addition of the ‘Songs of Innocence’ album.

The Joshua Tree is an iconic album and deserved of its musical relevance, but Bono kicked the evening off with songs from other albums - Sunday Bloody Sunday followed by other fan favourites New Year’s Day and Pride (In the Name of Love).

These iconic singles were all played with the band deep in the standing area of the stadium not supported by video projection of the band members onto the large screens.

The idea here it seemed was that the band would be the centre of attention rather than the technical achievements of the spectacular video experience available with international concerts these days. This worked well for the patrons who had secured themselves a good spot either through taking the afternoon off work to battle for a desirable general admission location or paying the extra for a decent seat.

For those in the back it would have been more about taking turns with the binoculars.

Any frustration felt by fans in the nose bleeds regarding the lack of video support quickly would have been forgotten as the band started to smashed out The Joshua Tree classics.

Where the Streets Have No Name, I Still Haven’t Found What I’m Looking For, With or Without You came through with excellent audio and acoustics – at least from the lower seated section - and were accompanied by a very impressive display of relevant art and graphics interwoven with shots and close-ups of the band, clearly making use of the latest technology available. If anyone has the flair and the budget to take advantage of these things, it's U2.

The hits kept coming with some intermissions for a few expected classic ‘Bonologues’.  Bono had a “prayer in the dark’ for the volunteer firefighters battling tough conditions across the country and showed a new level of self-awareness - after giving his thoughts on climate change protests – acknowledging that people can find it ‘grating’ when he ‘bangs on’ about his passions and interests.

"Alcohol? Sometimes. Chemicals? Have been. The Holy Spirit? I hope so."

The ratio of politically motivated speeches to the adored fan favourites from decades past was kept well in check. One Tree Hill and Angels of Harlem featuring towards the end of the main set left everyone impressed.

An encore of no less than eight songs long included Beautiful Day and ended with One gave the crowd an emotional high to leave on and memories to hold on to. U2 has once again shown they can give a stadium worthy performa 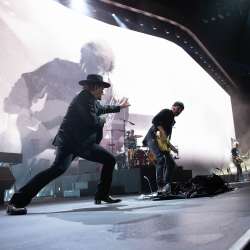 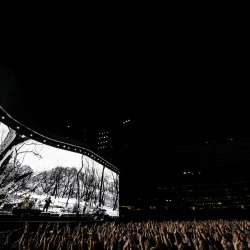 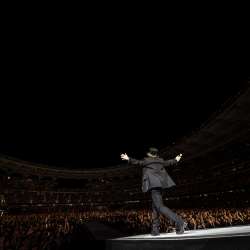