Jack Rabbit Slim’s was the place to be last night in Perth, as hot Brisbane band The Creases descended on the place as part of their debut album tour.

The Creases first burst onto the radar back in 2013, when they won a spot at Laneway Festival thanks to Triple J’s Unearthed competition.

Their highly-anticipated debut album, Tremolow, was released this August, and has been carving up the airwaves since. A long time in the making, the record was well worth the wait, and Jack Rabbit Slim’s was completely packed with eager fans ready for a show.

Ample support was provided by the opening acts, who both got the crowd up and grooving. Perth locals The Spring Peaks kicked things off with their infectious brand of sunny pop-rock, punctuated by joyful turns on the tambourine.

Following them was Triple J darling Hatchie, who turned down the tempo and had the crowd spellbound by her sultry vocals and dreamy guitar. Especially well-received was her high-rotation single Try, which worked its magic on the audience and had the whole place singing along.

Finally, after much anticipation, The Creases took to the stage and immediately kicked things into high gear with the pounding beats of Everybody Knows.

Two particular highlights were Arsehole, a new-wave flavoured crowd favourite for belting along to, and Static Lines, a frenetic groover from their earlier EP Gradient that satisfied long-time fans.

The show was brought to a rollicking close with Impact, a belting rock tune that induced even the most sedate patrons to head-bang along.

The Creases are undoubtedly ones to watch, and with a debut album so chock-full of hits, it won’t be long before the venues are bigger, and the tickets harder to secure.

The show was an energetic, charismatic performance from start to finish – absolutely catch it if you can, or you might just kick yourself later.

The Creases’ tour continues across September, with dates in Melbourne, Sydney and Brisbane. 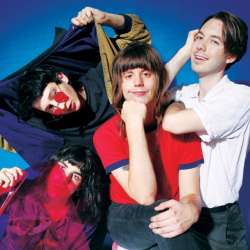