Local superstar chef Matt Stone’s first cookbook - The Natural Chef - is the perfect emobidment of all the talented boy from Margs stands for in the kitchen: simplicity, authenticity and above all, inventiveness.

Where your food comes from is the starting point for good eating. So says Matt Stone in the introduction to his new book, The Natural Chef. You may have eaten his delicious, innovative food at The Greenhouse when he turned out magical taste combinations in the eco-friendly, zero-waste restaurant in the heart of the CBD. He was the tattooed young star changing the world one dish at a time back then - he’s still tattooed and still intent on changing the world; he’s relocated to the Yarra Valley at Oakridge Estate but his heart still remains in part at least in WA.

His culinary career started in Margaret River in 2002, working at night and surfing by day, where, he says, he loved the ‘working until midnight, getting soaked washing dishes, getting yelled at, the rush of service'.

By the time he rocked up to The Greenhouse at just 22 his chosen path was already making waves. The extraordinary plant-covered restaurant with worm farms, plants growing and recycled water wasn’t just a flash in the pan. It was the proving ground for Matt’s focused approach to ingredients, integrity and hard-working ethic.

He was named Best Young Chef and Best Young Talent in WA, and Greenhouse was named Best New Restaurant. He popped up on TV, battling against Neil Perry on Iron Chef Australia (he lost, but only by four points, he points out), and even appeared in a foodie series next to ex-Blur bass player Alex James and MasterChef.

So of course the next step was always going to be his very own cookbook, and typically The Natural Chef lives up to expectations. You’ll love it if you’re keen to experiment with native ingredients, enjoy harking back to old cooking techniques like pickling and fermenting, and question your own habits in the kitchen. It could equally have been called The Mindful Chef - and if any cookbook can change minds and attitudes to waste and resources, it’s this one.

The Natural Chef by Matt Stone (Murdoch Books) is out now. 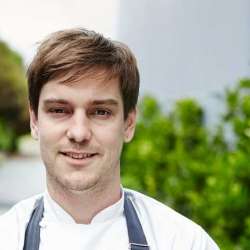