Coming off the back of their breakthrough album Blurryface, the Ohio duo Twenty One Pilots were back in Perth at the RAC Arena showing off their sixth album Trench to an enthusiastic albeit sparse all ages crowd.

Opening the show, Perth-born rapper Drapht used all the hits in his arsenal to pump up the crowd and with only a half an hour set time he stuck to his bigger numbers and left the crowd wanting more.

Fronted by the ever-energetic Tyler Joseph, Twenty One Pilots began their set with the single Jumpsuit from their latest album. Trench seemed to take a turn away from the normally playful sound and upbeat pop rock style songs heard in Blurryface and this was accentuated by the stage scene which featured a burnt-out car and a dystopian-esque backdrop.

The use of colour themes during their album promotion played a large part of their stage show with the red beanie coming out when they played their hits from Blurryface and yellow outfit changes and confetti falling during their new songs.

Despite the lack of people in the crowd and their generally younger following, Twenty One Pilots had everyone involved and made use of the entire arena by performing at different locations throughout their set and at one stage even having Josh Dun crowd surfing while playing the drums.

There is a constant feeling of energy emanating from them both and with the continual changes in musical instruments, outfits and genres makes it difficult to look away in case you miss something.

Unlike many other bands these two gave an almost theatric performance that had me up out of my seat and screaming along with all the teens beside me. 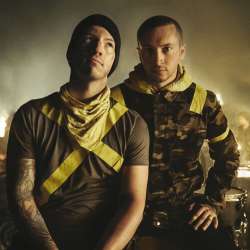