soccer is widely KNOWN to be the world’s most popular sport, But you may be surprised at what comes in at No #2, with an estimated 200 million participants - Ten Pin Bowling. Norman Burns heads down to the lanes to check it out.

Years ago, in the golden age of BC (Before Children), my Significant Other Half and I decided to have a day out on the town. Our plan was to kick off with a mid-morning visit to a bowling lane in the city (now redeveloped into an apartment complex), then onto a nice lunch and later catch a movie.

The bowling alley was deserted, apart from the adjacent lane where two chaps, in shirts so loud they were possibly a health hazard, were going toe-to-toe; they were League bowlers and locked in deadly serious practice. As the death rattle of strike after strike echoed through the alley, my SOH stepped up to bowl.

As she released the ball it sailed through the air, avoiding our lane entirely, on a trajectory into the one next door. League Guy #1 had to take evasive action to pull up his approach, like a jet aborting take-off. Meanwhile the rogue ball continued to fly, seemingly in slow-motion, over the “wrong” lane.

For a second I thought it would land and then pass harmlessly into the gutter but, alas, no. Before it disappeared noisily into the pin setting chute it clipped, with the faintest touch, one of their pins, sending it into a spinning “death roll”. No words were spoken but there was an audible sigh from the League Guys and a not-so-subtle shaking of the heads.

That little episode (we can laugh about it now) sums up the two sides of Ten Pin Bowling. For some, it is a cut-throat, full-on sport, where practice does indeed make perfect. For others it is just a bit of fun, a recreational diversion like mini-golf or riding a rollercoaster, not to be taken too seriously.

Getting the right “mix” is the challenge worldwide for Ten Pin’s ruling bodies, such as Ten Pin Bowling Australia - they need to keep attracting those playing occasionally just for fun and then out of this “pool” entice more to take up the game regularly, perhaps even go on to play professionally, like Australia’s Jason “Belmo” Belmonte (see breakout), who reached number one in the world and is still a top force in pro bowling ranks.

“Our main challenges are focused around attracting new people to traditional forms of the sport such as weekly league competition. In recent times many sports, including Ten Pin Bowling, have seen a decline in organised participation due a number of factors, including people having less time for organised sport,” says Ten Pin Bowling Australia general manager Chris Rushton.

“Tenpin Bowling can also be seen as an entertainment option and this can actually benefit the sport as over 2.5 million Australians bowl at least once a year. The challenge for us in the coming years is to convert a number of new people into programs or leagues and to regularly participate in the sport.”

“In order to achieve this we need to develop and promote programs aimed at new bowlers, especially children and people with a disability. We had over 6,500 children participate in our sporting schools program in terms 3 and 4 in 2015 and we are in the development stage of an exciting new eight-week junior program aimed at 6-12 year-olds where they can get involved in the sport and learn more about it,” he says.

Ten Pin, though, has a number of aces up its sleeve; it is a very inclusive activity (from the very young to the elderly), and is accessible and can be enjoyed by those with disabilities. It’s an activity perfectly suited to the corporate team-building day.

It is not weather-dependent and the social aspect, particularly for the elderly and those with learning or physical disabilities, brings a massive mental benefit. And whether you have eyes on the pro ranks or just want to bowl a few balls down the lane with mates, it is a hell of a lot of fun.

Of course, like anything, if you want to improve you need to go to someone who really knows their stuff - which is why I rendezvous with WA State Bowling coach Ken Thompson at the AMF centre in Cannington.

Ken got involved in bowling in 1976, when his wife took up the sport. He’s been playing ever since (his wife is still involved too) and since the 1980s has been coaching members of the public, kids and the state’s elite junior bowlers.

“Bowling is a repetition sport; it’s all about rhythm and timing,” says Ken.

“I learned a lot from a real master of the sport, Dick Ritger (Ritger won over 20 titles on the pro bowling circuit and was elected to the US Bowling Commission Hall of Fame in 1984). I went to one of his coaching camps in Ithica, in the USA, and he taught me about the mathematics of bowling. It’s all about getting your angles right each time and taking out the things that can wrong,” says Ken.

The release - when you let go of the ball - is a key element in getting consistency and thus higher scores, he says.

There’s also a lot of intricate stuff that the average, down-the-lanes-for-a-beer-and-a-roll bowler wouldn’t even think about - such as the “oil patterns” on the lanes.

The oil, or conditioner as it is known as in the industry, is spread via a special machine from US company Kegel, a world leader in Ten Pin Bowling equipment. This is a seriously complicated business, for the amount of oil - and its exact positioning on the synthetic boards used in most bowling alleys - determines just where a ball will “hook” on its journey towards the pins.

“You can basically ‘dial up’ what you are going to bowl,” says Ken. The actual lanes, too, must be perfectly flat, and calibrated to within 40,000th of an inch for legal competition.

Top of the line “reactive” balls (these stay unstable when they strike the pins, generating a lot more energy and thus better pin fall; the cheaper, “plastic” balls won’t hook at all and travel straight down the lane) can come in around the $300 mark; you can fork out close to the same for specialist “slide” shoes.

“These are like championship tyres versus ‘slicks’ compared to the alley ‘house shoes’,” says Ken, although he stresses you don’t have to go for the top-of-the-range gear to get into Ten Pin.

“I coach bowlers from aged 10 and upwards; it’s a great sport that cuts across ages,” he says.

For information about where to bowl in WA and more, visit tenpinbowlingwa.com.au; thanks to Ten Pin Bowling Australia and World Bowling for their assistance with this article. For lessons, contact Ken Thompson at kenthomo1@hotmail.com 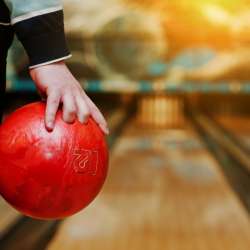