Being a Rocky Horror fan who has probably seen the film up to a hundred times since the age of 10, I went into Crown Towers knowing exactly what I wanted to see; waiting for the final outcome in antici……………………………..pation.

While the play could never, and shouldn’t necessarily ever, emulate the film with absolute precision; the authentic essence of Richard O’Brien’s 1975 sci-fi was captured just enough to take the audience to another planet; for a short moment at least.

The raw energy was greater than a screen can offer and the multitude of lights, live musicians, haunting makeup, fabrics, strong vocals and general effects brought the stage to life.

And while Adam Rennie, playing Frank N Furter, was no Tim Curry (and for better or worse no Craig McLachlan), he was easily the standout performer to make his character somewhat his own – with a tongue-in-cheek approach, high-energy actions and strong but slightly more feminine vocals.

Kristian Lavarcombe, playing Riff Raff, was not far off either with a chilling finale as he terminated his master in pursuit of an independent lift-off back to Transsexual, his home planet found within the galaxy of Transylvania.

At its peaks, his voice was uncanny to that of Richard O’Brien’s (original Riff Raff and writer of Rocky Horror for the Perth show only, lucky us) – also a very tough act to follow.

And the nostalgia was absolutely necessary given – what was the crowning feature of the performance in my opinion – Richard was on stage right beside Kristian, performing as the narrator.

It was uplifting to see how much he still gave to his production; first stepping out on stage in big blue gumboots and departing at the close with a solid effort invested into jumping around then instructing the Time Warp while some of the classic tunes completed the show.

Richard isn’t rocking the Time Warp with the same agility he once did, but he was in undoubtedly fine form for a man of 75 years who doesn’t look like he’s aged a day (almost) since his time as Frank N Furter’s servant, having maintained almost exactly the same slim physique.

His presence made me want to go home and re-watch his classic screen performance a hundred times again.

The songs were pretty much on point each time, provided the expectations I’d set myself based on the film. But what did trip me up was towards the second half of the production, a new track performed by Brad was thrown in for good measure and I knew instinctively that it wasn’t ‘supposed’ to be there.

After a bit of googling, I uncovered that in fact it was a part of the original score but cut from the movie, and for good reason in my opinion – a bit soft following Janet’s Touch-A, Touch-A, Touch Me; but equally a fun new bit of insight for fans who thought they knew it all.

Rob Mallet as Brad and Michelle Smitherman as Janet took a little warming up to, given what I felt was a cardboard character impression to start off with. But once their characters’ actions heated up, so did their energies.

Rob Mallet nailed it as an awkward but defiant Brad and Michelle Smitherman ended on a high with difficult but terrific vocals for the few final scenes, which flooded the crowd with energy – Susan Saradon’s incredibly high-pitched tone wouldn’t have made her job any easier.

I wasn’t sure if I liked the shift in Rocky’s approach, ditching the silent, mysterious, and broody blonde manner in favour of a camp attitude and an American twang, made evident by new flow of lines given to the character.

But what I did love was Nadia Komazec’s performance as Columbia.

For starters, she was a talented singer and tap dancer, which is a key for her character. But she also managed to capture the role accurately while bringing her own humour (with one particularly silly scene) to the table.

Her acting of emotional highs and lows was convincing and captivating.

All in all, it was a show to recommend – just don’t watch the movie right before. 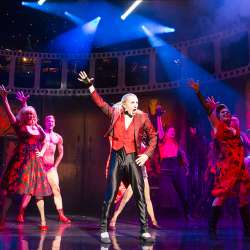