‘Nothing says “g’day” like a man in leather’  - so goes the banter with the Crown Perth crowd.

Add to that the Village People’s universally-loved disco favourites and you get a memorable and high energy throwback that all ages could get into.

Local, special guests Björn Again (loving the Swedish pun) were also well received and lived up to Benny Anderson himself’s compliment of being the closest version of the real thing, so it's safe to say new ABBA fans are going to get to the original ABBA experience.

Björn Again came out with some of the classics; Waterloo and Super Trouper, and mixed things up a bit with a cover of the more recently released Hung Up by Madonna. Top ABBA hit Take a Chance followed and then they broke it down, taking a chance themselves with break beats and a hip hop verse.

Audience reaction showed It paid off. I may have been sceptical if I hadn't witnessed the Swedish parody rap myself. A diverse audience, our fellow U.S disco and Swedish pop fans ranged from members of a generation that could have been front row centre in ABBA’s heyday, to the young and fabulous; from the reflective and reminiscing, to the loud and oh-so-merry… (esp. for a Sunday night).

Björn Again nailed it with the costumes and had a following of fans dressed in similar garb who were more than happy to follow along enthusiastically when the band had everyone stand and be led in some Ring Ring dance participation.

Then it was the headline act's turn and Village People didn’t hold back at all. Whether a diehard fan of their deliberately over-the-top catchy tunes and cultural stereotyping, on-stage costumes; or just vaguely familiar with their well-known singles from an increasingly distant decade, they certainly didn’t disappoint.

The dance timing sync seemed a bit of a struggle and as for the choreography - well, it was as if the group had met together recently and collectively tried to remember how they used to do it back in the 80’s. Having said that, It didn’t detract from the experience. It was expected and added a sort of charm.

The singing, flair, their ability to work the crowd and general over all likeability were all on point and didn’t disappoint.

Village People commented that their Australian fans had a natural affinity for the song Milkshake (which was news to me) but the audience soon proved them and their esoteric jokes to be accurate.

The atmosphere started relatively subdued, though the crowd soon warmed up again after the break. Going from classic to classic, Macho Man to In the Navy, it was full-on entertainment from start to finish culminating in a happily predictable Y.M.C.A.

At just under three hours in length with a decent 20-minute intermission between bands, the audience unleashed a commendable attempt at the well-known dance moves. While the lighting was impressive throughout, the production values were otherwise minimal and quite sparse.

A bare stage for both sets but well directed and creative lighting, and the anticipated great audio - it was certainly a fun night for all ages with a top notch performance from both groups.

I recommend a few beverages if uninhibited dancing on your chair is in order. 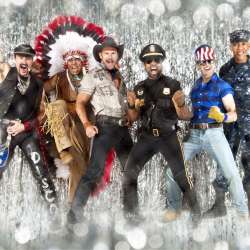