He's one of the USA's most unlikely-looking rock stars. The guy with 'always tired' and 'stay away' etched under each eye in a trend your parents fervently hope won't catch on.

He's also got the kind of dress sense which seems to follow Billie Eilish's penchant for 'medical scrubs baggy chic'. And last night, at the opening night of his Australian tour at Perth's RAC Arena, Austin's Post Malone smashed through his back catalogue of supersized hits with ease - despite frequent sips from a red cup full of something stronger than Kool-Aid.

Before he made his mark on the stage, Will Smith's son Jaden got the audience revved up. Master Smith had honed his chops at Coachella a few weeks previously, and up-and-coming rapper Tyla Yaweh did his best to make an impression too with an inpromptu march around the mosh pit on the shoulders of an slightly surprised security guard.

Then it was the main event, and Posty didn't disappoint - not least in his choice of performance togs. With a respectful nod to our recent ANZAC Day events, his PJs-come-lounge attire was festooned with poppies and the Aussie flag. We love him already and he hasn't even sung a note.

Post Malone doesn't have a band so the success of the show rests squarely on his slacker shoulders, and, aided by some impressive downlighting and his own voice, not since Ed Sheeran did solo so well has an artist held the audience in the palm of his hand.

Of course, he's aided considerably by the fact that all of his hits are so singable - from Rockstar to Sunflower, the audience were more than happy to be Posty's unpaid backing group, note and word perfect, lapping up the Texan's laid back approach to smashing his set.

He's come a long way over the past 12 months - apparently WA is his most star-struck state of fans, downloading more of his music than any other Aussie collection of residents. His sell-out concerts will do nothing to diminish his bright flame of fame if this show is anything to go by.

Closing the set with Congratulations, Posty is proof that if you've got the drive, some comfy pants and questionable tattoo choices, the world can be your oyster too. 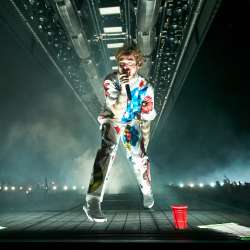 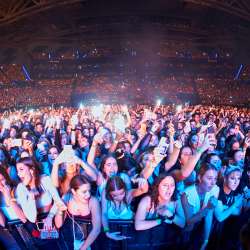 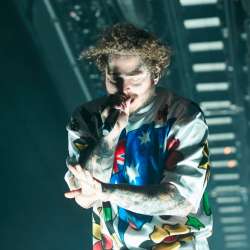 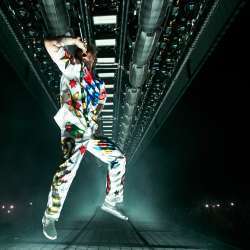