Every day, billions of cups of coffee are drunk - creating mountains of coffee ground waste. Most goes into landfill, where it produces gas that is contributing to global warming. But thanks to Perth’s Julian Mitchell and Ryan Creed, this waste can be put to good use - and a tasty one at that.

My day doesn’t really get going until I’ve absorbed a smooth, aromatic, hot (but not too hot) cup of freshly brewed coffee.

But then, I’m no Lone Ranger here - an estimated 2.25 billion cups of coffee are consumed around the globe every day.

Great for the baristas, coffee shops, importers, exporters and possibly even the farmers on the ground (especially if it is Fair Trade coffee which guarantees a certain price for the coffee beans harvested) but not so good news for the environment.

It’s the coffee waste (the grounds) that is the problem; millions of tonnes of this by-product are produced each year, most thrown out in the rubbish where it ends up in landfill. Along with other food waste, the grounds decompose, producing vast amounts of methane gas and CO2 - both big factors in ramping up the Earth’s temperature.

Luckily, before me and my fellow coffee addicts leave the Earth sweltering, Venus-like, from a mountain of coffee grounds there’s now a growing awareness of this problem - and a lot of smart people have come up with ways to not only dispose of coffee grounds safely but in a value-added way to boot.

Two of these visionaries are Perth’s Julian Mitchell and Ryan Creed, physios-turned-entrepreurs-turned-mushroom growers, who are not only helping save the planet from coffee fiends like myself but in doing so are producing some amazing, gourmet, environmentally friendly food along the way.

The pair are the brains behind the cannily named Life Cykel, and their ace-in-the-hole product is the gourmet oyster mushroom.

“We’ve always been passionate about the environment and a healthier, sustainable lifestyle,” says Julian, “and this is a great way to tackle both.”

Life Cykel’s origins started with being one of the winners of a Fremantle City Council initiative (Fremantle One Planet Pitch Event) calling for ideas for sustainability projects; the council committed $15,000 to the project, as long as Julian and Ryan could match the amount. That proved a cinch; the pair, via social enterprise crowdfunder StartSomeGood, raised around another $30,000.

With tonnes of coffee waste generated in Freo’s booming cafe scene each month, the port city was the ideal place for Life Cykel’s clever coffee-grounds-into-delicious-mushrooms idea to literally take root.

Life Cykel’s production process is housed in three shipping containers on what had been a vacant block of council land in an industrial block of Freo.

There are slight echoes of mad scientists at work here; in one container are dozens - no possibly hundreds - of bags of coffee grounds, mixed with either recycled paper, cardboard or straw soaked in water. The grounds make for the perfect environment for mushroom growing.

In another sea container - the lab - the oyster mushroom spawn is carefully cultured. Once the spawn is added to the bags, a “mycelium” colony takes root.

Around seven to 10 days later, growing - well, like mushrooms - the oyster mushrooms appear and are ready for harvest. The mushrooms are packaged in special boxes (around 1.5kg per box) and, as well as being a healthy food source, there is a lucrative commercial aspect to the operation. Oyster mushrooms can fetch around $60 a kilogram.

“Oyster mushrooms haven’t, traditionally, been part of the Australian food scene but they tick all the boxes when it comes to nutritional value; also, they don’t travel well; they’re very perishable and can’t be shipped around the place, which is why we are producing locally and selling to local cafes who can get a ready supply of delicious, fresh mushrooms straight from the source,” says Julian.

And even if you can’t get down to one of the restaurants for a taste of LifeCykel’s mushrooms, you can buy a grow-them-yourself-box (just under $30 each).

The potential for Life Cykel’s oyster mushroom operation is enormous; already Julian and Ryan have set up a farm in Margaret River and are looking at expanding to the eastern States.

An amazing feat, really, considering the company is just over a year old and its owners both just aged 28.

“We’ve learned a lot in the process,” says Julian. “Not just about growing mushrooms but about logistics, shipping, management, marketing, warehousing - dealing with chefs - and along a whole lot more. In my old job, working in healthcare in the mining industry, a good day could be a ‘nine’ or ‘ten’; in Life Cykel it could be hundred times that but the obstacles have also been challenging. But both Ryan and I are passionate about the product; and it means a lot to get feedback from local chefs and cafes about how great the mushrooms are. And we’re especially grateful for the Fremantle City Council which saw the potential in our idea.”

Julian and Ryan don’t plan to stop at oyster mushrooms (which have a mild flavour with a velvety texture and are ideal accompaniments for chicken, seafood and pork), and are looking at introducing more varieties.

Which is great news for an unabashed coffee addict like me, who knows all that coffee waste is going to be used for the greater good.  PL 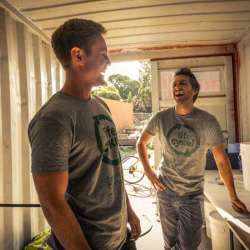 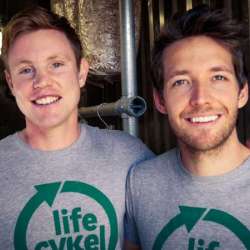 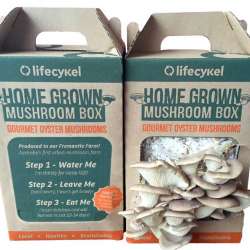 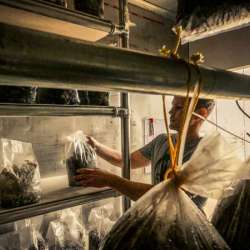 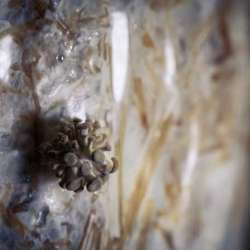 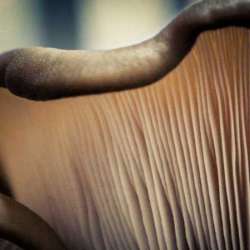 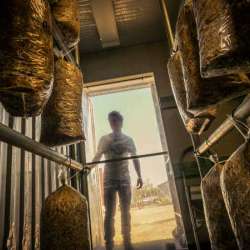 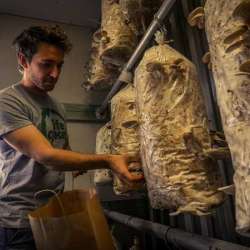