Cloud Control, the psychedelic four-piece from the Blue Mountains of NSW, have enjoyed a successful tour around Australia before their final show last night at the Badlands Bar, Perth.

The group have been behind studio doors for a few years, perfecting a new sound with their feature album Zone, which is full of ethereal, sweeping synth effects and resonating vocal harmonies, contrasted with the punchy and nasal singing style of their lead vocalist, Alister Wright.

The group could not have chosen a better venue to round out their tour. One of the most under-rated live music venues in Perth, Badlands has a welcoming exterior, uniquely cavernous and moodily lit interior and boasts superb acoustics for live performances.

With a constant rumble underfoot moving up through your body and enhanced by the sturdy bass kick of the drums, pumping through your chest.

The openers Tiny Little Houses warmed up the audience with playful banter between songs, encouraging them to move into the mosh space of the multi-tiered venue. The lead singer’s angst-ridden lyrics with the use of chunky power-chords took the audience back to their favorite 90s grunge, with a modern noise-folk style twist.

With the lights fading down, the band entered the stage under darkness, and without hesitation, Cloud Control starts into their opening number, Treetops, an up-tempo, toe-tapper, embodying the ambience for the set.

The male and female lead vocal combination is a treat for the ears, with Heidi Lenferr’s consistent and pure vocals contributing to the music’s psychedelic vibes. Her ease on stage, with a gentle sway or shake of the tambourine, left the audience mesmerised.

The crowd favorite of the night - Panopticon - captures the essence of the band's new album. A strutting-paced drum beat, complemented by a bluesy little baseline and embellished with sweeping synth chords, which float up to the surface through the dreamy verses into a clean and powerful chorus, gently shocks you back into reality.

The set was a beautifully paced journey of sound, taking the audience from slow and surreal, to energised and lifted, often within the space of a single song.

Closing on Dream Cave, Cloud Control left the audience on a cloud of positive energy, after being under their spell for 90 tranquil minutes. 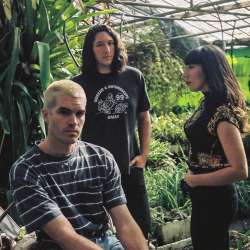