Daisy finally got her wish - a shiny new trampoline for Christmas, and so far my misgivings about this bouncy investment have proved misplaced.

Daisy began her relentless campaign to bring a trampoline into our lives when she was barely tall enough to clamber onto one.

The bounce bug bit her one summer holiday down south, the best part of a decade ago, when we rented ourselves one of those beautiful holiday houses Margaret River seems to have in spades. For those three days, in Daisy’s eyes, the big expanse of stretched plastic in the backyard was by far the best drawcard, easily trumping the beach, pool or bush. It was hard to pry her off the thing, even after the sun had long set over the Indian Ocean.

The journey home, then, was one long, excited monologue about the benefits of bouncing up and down for hours on end, each wide-eyed description punctuated with a breathless plea for us to get a tramp of our own.

Activating dad mode, I doled out a few I’ll-think-about-its and presumed that once we returned to the ’burbs she’d forget all about it and move on.

From that moment on, every letter to Santa included various pleas for a trampoline, often accompanied by a picture of one to show him what she meant; every birthday lead-up was a succession of hints about how happy a backyard bouncer would make her.

But I stood fast, didn’t buckle. Didn’t buy the tramp.

I can hear the boos and hisses as I write this. That poor little girl, why wouldn’t her dream come true?

Well, let me put my cards on the table and explain just why, when in all other areas I fall easily into the over-indulgent parent category – a quick stocktake of our house will definitely throw up more phones, bikes, laptops, scooters, games consoles and over-priced trainers than is strictly necessary – when it came to the trampoline question, I held my ground for so long.

To be blunt, they scare me.

There, I’ve said it. Trampolines have been my irrational fear for about as long as I can remember. As a child, I remember looking at them and seeing nothing but gaping holes between rusting springs which were sure to devour my leg as soon as I attempted bounce #one. Even if that gruesome fate didn’t get me, I was sure somehow I’d be thrown from the infernal contraption within minutes, plummeting face-first towards its hard, concrete surrounds. In my mind, there was no way I could ever spend even the shortest time on a trampoline and walk away unbroken.

It’s a prejudice that has lived long in me, one I couldn’t put away. So, while I was happy for my kids to cycle without helmets, bomb rashie-free into backyard pools, climb walls topped with barbed wire, poke wasp nests with sticks and take part in any other old-school kids activity that nowadays would be frowned upon, I couldn’t bring myself to risk bringing a trampoline into our backyard.

But still they kept cropping up. A birthday party here, a Saturday afternoon barbie round a mate’s there. More holiday homes, an adventure park or two. The darn things just wouldn’t leave us alone – and Daisy’s desire to own her very own just kept getting bigger.

And then we moved house, and suddenly the dynamic shifted. While the move was a generally positive one, a sensible downsizing after successfully shooing the eldest two of our five out of the nest, it did have one negative – our old house had a pool, our new one doesn’t.

Yes, I know – first world problems and all that, but it’s hard to explain to an overindulged brood why they would no longer be able to just saunter out the backdoor whenever they fancied a dip.

To their credit, they took it on the chin, mainly due to the old ‘location, location, location’ adage proving true as any downsides were dispelled by suddenly being within walking distance of school and most of their mates.

Daisy, though, is a canny beast and she knew that the shift offered her the perfect time to strike. “Daddy,” she said, a day after the move, “now that we don’t have a pool, does that mean we can get a trampoline instead?”

I replied in the negative, of course – there was no logic in the claim, losing a pool means nothing, she should think herself lucky, there’s kids starving in Africa, that kind of thing. But, hey, she had a point.

Which is why, a few weeks before Christmas, I visited a few trampoline-owning friends just to see what it was I was up against. With my wife holding my hand and whispering soothing mantras, I actually faced my nemesis – and, boy, was I surprised by what I found.

Trampolines, it turns out, have changed from the harsh metal structures of yore. No longer can one slip spell disaster, no longer do you put your child’s future in the lap of the gods each time you lift them onto the tarp.

And get this, the good ones don’t even have springs, let alone gaping holes for stray legs to disappear into. No, today’s trampoline is a paragon of safety. So, after a lifetime of prejudice, I relented – and Daisy woke on Christmas morning to the news that a man was on his way to put together her very own tramp.

It’s a month on now, and I can report that we are proud tramp owners – and all of our kids can still walk. And I have to say that I’m a complete convert.

It’s used daily, as Daisy and her brothers push to conquer flips and somersaults, but also as a social hub. Warm nights, see it become an impromptu cubby house, a gaggle of pre-teens and teenagers sprawled out on the tarp, net zipped, music playing, giggles rising, conversation flowing. Twice, it’s even hosted sleepovers.

The moral of this story, then, is, for grown-ups at least, confront your fears and you may well be very happily surprised. For kids, though, the point is clear – persistence will get you what you want. It may take a decade, but if you really want it, just don’t stop asking your mum and dad. They’ll cave eventually, trust me. 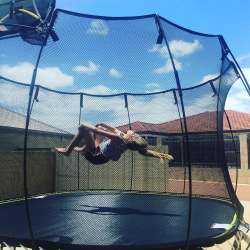