I’ve always said we’re not a dog family, but I love to be proved wrong and in this case it’s by the latest arrival into our lives - Ralph the Shepweiler.

We don’t really do consistency here at chez Mills. We give it a good stab, but the truth of the matter is that none of us are much good at seeing things through or sticking to our guns.

We have, for instance, often bought sugar paper and glittery stickers to painstakingly craft impressive star charts, tacked them to the fridge with an I-heart-Broome magnet and stood back and waited for the patented reward system to turn our children around, chore or homework wise – only for them to finish up in the recycling bin a week or so later (the star charts, not the kids).

Meanwhile, our many internet-rationing plans have always been excellent in theory, yet somehow kyboshed by the fact that, actually, an iPad is quite a good babysitter when you’ve got a dozen deadlines looming.

And I have at least three pairs of unworn trainers at the back of the wardrobe waiting for the running regime that regularly seems like a good idea when discussed over a backyard bottle of sauvignon blanc, but not quite so appealing when the pavement beckons on a chilly winter’s morning.

So, no, we’re not really that good at sticking to the plan, instead just happy to live in a permanent grey area of make-do-and-mend, seven souls swept up in the rapids of life rationalising our actions way after the event and making little effort to learn from our mistakes.

Until recently, however, there was one big exception, one rule that I was adamant we would stick to for as long as there was a Mills to tell the tale – and that was that we would never, ever get another dog.

I can feel heckles rising as I type those words – dog lovers of the world are generally appalled at canine nay-sayers, and rightly so, so I must say quickly that I’m absolutely not a pooch-hater.

I love the things and am all too aware of how wonderful an addition to a family they can be. I’m surrounded by great dogs, owned by great dog people. Both sets of grandparents have four-legged-friends and my lovely sister-in-law Lou works with trained sniffers at the airport and she and Dan have beautiful Jasper and new recruit Simba to come home to.

And many of our friends have mutts to be proud of, not least Russell and Anne who are the proud owners of an actual Game of Thrones-style direwolf (it’s a leonberger – google them if you think I’m exaggerating).

So, yeah, for those kind of people dogs are brilliant. We however once gave it a go and failed so miserably that I vowed to dedicate my life to literally keeping the wolf from our door.

His name was – is – Milo and he arrived just over four years ago, a sparkly-eyed ball of beagle energy who flew into our house in a whirl of yaps and nips and puddles of pee.

What followed was months of desperation and despair as we tried so hard to be good dog owners, but Milo was just having none of it. His ability to destroy knew no bounds, everything from cherished teddy bears to a $1,500 laptop disintegrating in his path. His escapology skills put Houdini to shame – regularly he’d be out of what we thought was our secure garden to terrorise postmen and elderly neighbours with his incessant high-pitched bark.

And the poo. OMG the poo. Just how a dog so small could create such an ocean of excrement I do not know, but our garden was awash and indoors he would constantly find novel and interesting new places to deposit his business.

For the longest time I felt like the lone voice of reason, pleading with all around me to admit that we simply weren’t dog people, only to met with the conviction that Milo would turn around any time soon and everything would be OK.

But eventually the truth was acknowledged. One day, as we all cowered in the bathroom as Milo shredded an antique bedspread in the sitting room, it was agreed that he had to go.

And we did the right thing by him. With Lou’s help, Milo was rehoused to a farm with plenty of space, other dogs to run with and calm, talented dog people to raise him properly.

He’s now happy and healthy – stark proof that, obviously, he wasn’t actually a bad dog, it was just that we were bad at having a dog. The reality was a blow, but we learned our lesson and settled down to a dog-less life, all of us agreeing that we would not risk doing it again.

Which makes it all the more ridiculous that Ralph, our handsome German shepherd/Rottweiler cross is, right now, asleep peacefully on the sofa behind me. Yes, despite everything, we’ve got another dog.

Before you call the RSPCA, give me a second to explain. I was ambushed, by a rash decision by our eldest, who flew the nest three years ago, to buy young Ralphie without really thinking through the consequences.

Much consternation ensued and I was oh so close to handing him straight to someone who could look after him properly, but the look on the children’s faces, the pledges, the promises to work harder this time broke me and we’ve taken him in.

There are plenty of conditions, but so far, nearly two months later I’m proud to say that my brood have stepped up to the plate. Ralph is calm, loving and settling well into a home that I would have once said would never have worked for him.

In short, touch wood, it looks like I’ve been proved wrong – and I love it. Maybe it’s simply that we’re all four years older or maybe this time we have finally learned from our mistakes and can have a second chance at this big responsibility.

Whatever happens, we’ll put Ralph first and make sure he lives a long and happy life, but for now it actually looks like we might make it as dog people. 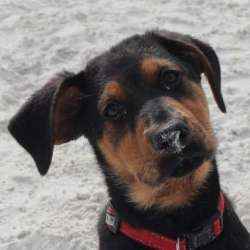 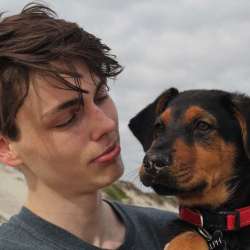 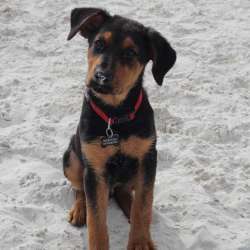