We're two songs in and I turn to my daughter and yell into her ear "this is the best concert I've ever been to!".

Except she can't hear me because Tre Cool is drumming so hard and loud all human communication is rendered useless. Unless you're Billie Joe Armstrong, Green Day's master of the mic, Barnum-like ringleader and general all-round rock god. From the get go, he was in total control of the throng before him, from the girls and boys squashed up against the barrier at the front, to the corporate suits in the Gods. There's stage presence, and there's Billie Joe Armstrong.

Somebody had obviously tipped him off that Perth concert goers can be somewhat reticient to get off their seats; he was having none of it.

"Stand up!" he demanded. "This isn't a f***ing tea party." We all duly stood up and didn't sit down again until two and half hours later.

The mosh pit which had swelled to capacity in anticipation of Green Day's arrival on stage at 8pm sharp on Sunday night moved as one, surging towards the stage as Billie Joe and his band lit it up, literally and figuratively. This was a show with all the bangs and whistles, pyrotechnics almost out banging Tre on the drums.

The set, with different Green Day banners dropping throughout the night, had Tre sitting on high, Dalek-like illuminated orbs around his throne. Billie Joe, bassist Mike Dirnt and guitarist Jason White led the revolution from the front. Touring their latest album - Revolution Radio - the band knew that the party faithful would demand the classics and as soon as Holiday started up, the entire room lost its collective minds. Dads with their teen sons, middle aged Claremont BFFs out on a Sunday night, guys with arms around each other singing their hearts out, and that throng of good natured superfans moving like a swarm in the heart of the arena; we all hung on Billie Joe's every word.

Some concert goers would have extra cause to remember this night. Just a few songs into the set, Billie Joe asked for a member of the audience to join him on stage. There was no shortage of volunteers but eventually it was one Billie Gray (according to Facebook) who was threaded over the heads of his fellow fans and thrust into Billie Joe's arms. He took the mic and sang and then, at his hero's insistence, ran helter skelter down the runway and into the pit, swallowed up by arms and shoulders of those below. It was the first of several audience participation events which made this concert the most inclusive I've seen.

There were singalongs (including Shout, Hey Jude and, even before the band were on stage, Bohemian Rhapsody), a sax solo by Jason Freese which veered off into Careless Whisper, much to the crowd's delight, and thanks to Billie Joe's ongoing, often sweary conversation with his audience, it made for a genuinely heart-warming show. Despite their ups and downs, the battles with demons and a determination to inject every show with near-impossible energy levels, Green Day have created a must-see show for the ages.

There was plenty for the true fan to love too. It's hard to believe that Green Day have been at the rockface for the past 30 years, and as such, they've got a huge back catalogue to draw on. Billie Joe went back to 1991 with one of their second album Kerplunk's hits - 2,000 Light Years Away - and loooking down at the seething pit, so many sang every word back to him. Another fan made it onto the stage and had such a tuneless voice, the band took several moments to recover after he'd exited, airborne, into the crowd.

As in other concerts around the world for this tour so far, there was a high expectation for a young fan to join Billie Joe on stage as a temporary guitarist. One fan optimistically held up a sign 'Can Play' but Billie Joe wanted a girl guitarist and picked out Sade, a 16-year old who'd been playing for three years. In what must be the best moment in her life so far, she had a masterclass in chord playing from Billie Joe who knelt next to the overwhelmed young girl as she mastered the music. And then she was away, playing with Green Day. On the stage at Perth Arena. In front of thousands of screaming fans. And if that wasn't enough, at the end of her riff, Billie Joe gave her the guitar she'd been playing. Predictably, the crowd went nuts. Sade, her long, long red hair swaying, left the stage wondering why her lucky stars had conjoined for those few minutes.

Of course they played Boulevard of Broken Dreams - and we sang every word - but it wasn't until the encore that we really got the drug we craved. American Idiot, so apt in these Trumpian times (and yeah, Billie Joe doesn't dig the 45th President at all, as you can imagine), was as much a call to arms for those who don't buy into the way the world works these days as it ever was. T-shirts selling in the foyer urged us all to ditch homophobia and racism, and maybe for one night, the world was a better place because of these boys from California.

The rest of the band finally left the stage, leaving Billie Joe with an acoustic guitar in the spotlight, singing Good Riddance (Time of Your Life). The spiky haired man in black filled the stage with his presence and as we all did his bidding one more time, it was indeed the time of our lives. 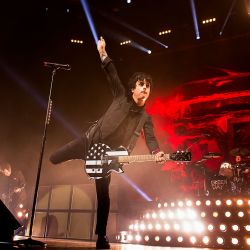 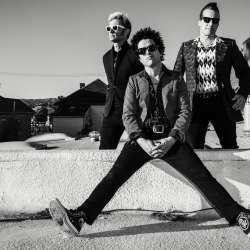 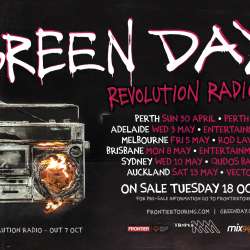 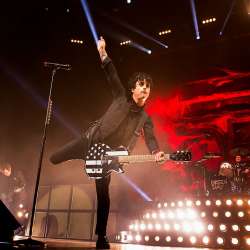 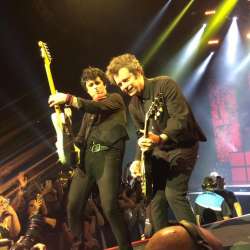 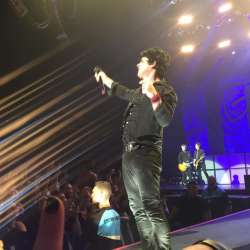