PEARD REAL ESTATE WAS PROUD TO SPONSOR THE BIGGEST PEARD FITNESS CHALLENGE TO DATE WHEN THREE MEN PUT THEIR BODIES ON THE LINE FOR A VERY WORTHY CAUSE.

If you missed it over the Telethon weekend, former rugby legend Matt Fuller, MMA fighter Soa ‘The Hulk’ Palelei and Perth fishmonger Josh Catalano, spent a gruelling 24 hours sweating it out to raise $76,000 in this year’s Peard Real Estate Fitness Challenge for Telethon. Seasoned marathon hero Matt was no stranger to the pain of 24-hour challenges, and neither was Soa, who discovered what it meant to exercise non-stop for 24-hours when he joined Matt in 2015. The men grinded through the pain like champions and while we all thought they wouldn’t be back for more this year, they proved us wrong.

They were back, and this time they brought along a new third member to join the team - Josh Catalano. Matt's vision has always been to grow the challenge in terms of participants and of course, funds raised. “First and foremost it’s about the kids, but I’ve wanted to bring something new to the 24-hour challenge for a while and I hoped from this start that the team would grow.

“It was awesome to share the experience with Soa last year, and to add Josh to the mix this year was unbelievable.”

Josh committed to the challenge earlier this year, pledging to ride an indoor bicycle trainer for 24-hours in his first ever challenge, while Matt and Soa powered through the ergo grinder once again.

But the father of two had his world turned upside down when his son Lenny was born premature at 24 weeks. Josh would now be riding for him, giving him the ultimate motivation. Josh’s touching story only added to the emotion of the event for both Matt and Soa and everyone who was there to support them. “Josh was a true champion,” said Matt. “You could see and feel the pain he was in, but he just kept going. “To get through a challenge like this with the emotional stress of a child in hospital would have been too much for most. He did it for his little boy and we were all on the emotional journey with him,” says Matt.

The Telethon weekend saw hundreds of Perth locals bring along words of encouragement for Matt, Soa and Josh, keen to get a picture with the men who they labelled “heroes”, and rightly so. The atmosphere was buzzing and the men often had a large audience cheering them on, even during the early hours of the morning.

They crossed the finished line at 6.50pm on Sunday, October 16 at the home of Telethon – Perth Convention and Exhibition Centre. The mood was electric. Streamers and balloons flying across the room with loud cheers and applause coming from every corner. Emotions were running high as Peard’s Managing Director Maree Overton presented the final cheque for $40,000 and Matt gave a speech thanking everyone who supported the team.

So with the challenge over for yet another year, we had to ask . . . “What about next year”? “We’ll be back,” says Matt. “If they’re back, we’re right behind them,” says Mrs Overton.

After sponsoring the challenge for the fifth year in a row, Maree says it’s an event the company is very proud to be a part of. “As a company we stand by our commitment to always give back to the community and Telethon remains close to all of our hearts.

“It’s an absolute honour to sponsor Matt each year, we have the utmost respect for him.”

Next year, Telethon will celebrate its 50th birthday and we have a feeling it’s going to be the biggest event yet.

Tax deductable donations to the men’s effort scan still be made via mattandsoa24hrgrind.
everydayhero.com/au/telethon 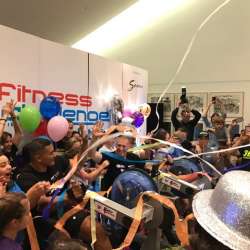