Sport is part of the Australian DNA, yet many children in Indigenous or disadvantaged communities have little or no equipment, facilities or even the motivation to make a healthy choice and play sport - but WA-based Fair Game is on a mission to change that.

Dr John van Bockxmeer is the kind of guy, even if you’ve never met him, that can really rile you - in the nicest possible way.

By rile I mean to spur you to take a good, hard long look in the mirror and ask yourself “what do I do to make the world a better place?”

John, apart from being an emergency medicine specialist, fitness instructor, a key player in innovative programs such as an international HIV fundraiser and the co-founder of urban planning think tank FuturePerth Inc, somehow also found time to set up a unique WA-based charity, Fair Game. And all this at just 31…

The premise is simple, the consequences broad; Fair Game collects unwanted, or donated, sports equipment and distributes it in remote areas of the state or to disadvantaged communities in towns and urban areas. Fair Game then helps run, or set up, fitness and wellness programs to show kids there is a better way in life.

Helping others has been in Pilbara-based John’s DNA from the get-go.

“I have always been drawn to activities that help people. When I was five years old I set up a rock museum for friends and family,” he says.

“From this moment forwards I realised I loved work that inspired people. I am happiest when using innovation and creativity to find simple solutions to complex problems. My parents have always instilled a strong sense of social justice into our family and I continued to work towards improving the status quo for others.

“I have found volunteering to be an excellent conduit for channeling my energy into achieving positive outcomes for myself and others,” he says.

John was already a fully qualified doctor working in the demanding environment of the emergency department when he got the spark for Fair Game.

“Fair Game was born out of first-hand experience here in the Pilbara region. I was shocked to see young children playing football with rubbish instead of equipment. At the same time I was seeing young patients presented to the Emergency Department with preventable lifestyle-related illnesses,” he says.

“I was shocked that a large number of people here in Western Australia did not have access to the benefits of making healthy lifestyle choices. In an attempt to help break this cycle I began to collect recycled sports equipment with some friends and we set off on a road trip from Perth to Kununurra donating recycled equipment and using it to run sports, fitness and wellness programs in communities across the state.’’

Fair Game has proved a massive success; so far thousands of pieces of sports equipment have been donated throughout WA.

The program’s main aim isn’t, though, about developing budding sporting champions (although that could well happen) - its emphasis is to boost participation in sport and exercise, which in turn has massive benefits for the physical, social and mental health of a community - especially in the Indigenous arena - as a whole.

•    Physical inactivity is estimated to cause 22% of heart disease and 10-16% of colon and breast cancer and diabetes;

•    In WA 41% of adults are insufficiently active for good health and less than half of school-aged children undertake recommended physical activity guidelines;

•    The direct health care cost of the contribution of physical inactivity in Australia equates to $1.5 billion a year.

Despite literally kicking goals though, Fair Game doesn’t receive a cent from the government.

“Unfortunately, Fair Game’s holistic approach means that we do not receive government funding. We have some fantastic pro bono support from a number of companies who share our vision for a healthier Australia. These include storage donated by CTI Logistics and Christ Church Grammar School, vehicle hire from AVIS Perth and legal support from Jackson McDonald,” says John.

“We realised that although the equipment was recycled, it was an incredible enabler of positive change,” says John. “It helped break down barriers to participation and our unique programs (these include Indigenous yoga, AFL drills, basketball, dance, fitness and conditioning challenges and Indigenous-specific participation programs) have been developed to be delivered with this to promote health education messages in a fun and engaging way.”

Fair Game, too, now trains the trainers through its Fair Gamers program, aimed at giving volunteers the right skill set to eventually ‘go on the road’ to the remote WA communities. Applications to become a Fair Gamer open in September, with successful applicants beginning training the following February.

“Our youthful Fair Gamers are now undertaking collection drives and road trips up to 40 times a year,” says John, who adds that donations are based on the needs of target communities.

From cricket bats, to sports clothing, balls, footwear - currently there is a shortage of small-sized football boots - Fair Game welcomes them all and donors can put equipment into one of the many blue bins across Perth.

“Fair Game has regional co-ordinators and teams completing trips with our partner communities across Perth, the Pilbara, the Kimberley, the Mid-West, Goldfields and Wheatbelt. Our target population is defined as the ‘under-serviced Australians’ and we have a large focus on remote Aboriginal communities but also on CALD (Culturally and Language Diverse) groups in Perth.

“We have some tremendous local partners with sports teams such as the Edmund Rice Lions and Butler Falcons who are predominantly African AFL teams in Perth’s northern suburbs. Our scope is to ensure all Australians have access to the healthy lifestyle benefits of sport and fitness,” says John who adds that Fair Game is also an evolving organisation.

“Fair Game is achieving sustainable growth through a ‘hub’ model whereby local hubs have started to collect equipment and respond to their community’s needs," he says.

And as for himself, he plans to continue to expand his medical knowledge.

“I am loving my work here in the emergency department in Port Hedland and in Midland in Perth. I am personally interested in completing a research project evaluating the treatment of severe sepsis in a rural population…and I am interested in becoming a key leadership figure in the health system here in Western Australia.”

I for one don’t doubt he will, one day, achieve that. 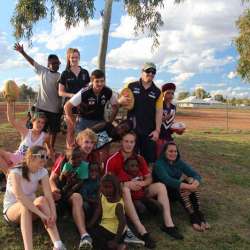