Marcus Graham, the charismatic ex-WAAPA student is back on our screens again in Secret City. Carmen Jenner digs deeper to find out what else he’s been up to.

It’s rare to meet someone who embraces getting older, particularly one who was launched into the public eye because of his star appeal. But then again, Marcus Graham isn’t your typical actor.

Anyone living in 90s in Australia will probably remember Marcus from his hunky wheelchair-bound role Wheels in E Street. Gossipmongers know him as the guy who was famously ditched by Nicole Kidman for Tom Cruise. Anyone with a remote control will have seen him pop up in the last 25 years in David Lynch’s Mulholland Drive, Good Guys Bad Guys, Underbelly, Stupid Stupid Man, City Homicide, Crownies, Home and Away and Blue Heelers, which earned him an AFI award. In the past two years he has appeared in the TV series Hiding, resurrected his Crownies Danny Novak character for Janet King and played the evangelistic Pastor Rob Shand in Jack Irish;, a role he found pivotal to his career.

“Playing the preacher shifted something in me. It brought me back to theatrics,” he says.

Some of his stage performances include The Rocky Horror Picture Show, Pericles, Les Liaisons Dangereuses, Tartuffe and the climatic The Blue Room, where he gets his gear off to a very appreciative, or intimidated, audience depending on your perspective.

The ruggedly handsome 52-year-old says the passing years have helped him take life at a calmer pace.

“I don’t feel the need to perform anymore. On the opening night of White Devil in New York, I walked out on stage for my monologue and paused. I realised there was nothing to be scared of. I used to be nervous and worry about what people thought about me. It took 50 odd years to get here and now life begins. It’s fantastic.”

Originally from Perth and a Western Australian Academy of Performing Arts graduate, I caught up with him when he was in town to promote the political drama Secret City, in which he played Andrew “Griff” Griffith, a journo who will do anything to win. Despite Griff’s highly competitive nature being a pet hate of Marcus’ in real life, he nailed the role as an antagonist in the hit show that gained rave reviews last month.

Marcus also enjoyed playing a member of the Fourth Estate. “With one comment a journalist can change the public’s point of view,” he says, adding that he enjoyed the thrill of filming in the nation’s capital.

“Shootingin Parliament House was really exciting and disempowering,” he says. “Usually the film crew take over but not there, not in Parliament House. There was security everywhere and we had to be on our best behaviour. The corridors are so wide. And shooting in the PM’s courtyard was a privilege; especially against the backdrop of the budget tree which blooms every time a new budget is released.”

Marcus adds that he’s looking forward to his next project, now that the whirl of Secret City is over – currently he’s reading a script about the life of controversial WA businessman Alan Bond, as well finding himself engrossed in Herman Hesse’s classic novel Steppenwolf, a story about a middle-aged man going through changes. “That would make a great theatre piece,” he suggests.

His next move is eagerly anticipated. 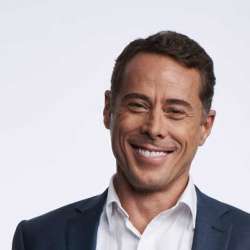