Have you seen the Peard Real Estate Group’s new television advert yet? It’s just another part of the company’s continuing successful marketing campaign.

The Peard Group ticked another advertising strategy off their list this year with the launch of their first ever television ad - and it’s been a huge success.

Maree Overton, Peard Group’s Managing Director says she always knew there was great potential in television advertising but the response has far exceeded the company’s expectations.

“We pride ourselves on corporate marketing and we felt the mass reach television could offer would complement our existing brand strategy really well.

“The Peard name is a well-known one in the local community, but there was a particular message we wanted to send out.”

As a locally owned and operated company, the Peard Group was started up by CEO, Peter Peard, who’s still very much a part of the day to day operation of the company.

Yet, many would be surprised by that.

“Very few founders are still so involved in the successful business they started 20 years ago. But Peter is still the face behind the name and he’s backed by a hard-working group of people”, explains Maree.

The ad, which shows the large Peard team standing with Peter, represents unity and a sense of team spirit.

“It was a lot of fun shooting the ad and getting everyone together in one place,” said Maree.

“We wanted the ad to showcase our company’s greatest achievement - our team. We knew the ad would lift the Peard profile, but when our appraisals started to increase daily, we were quite blown away,” says Maree.

The Group’s Marketing Manager, Dea Lalovic, says the ad was an awareness-building strategy in what has been a difficult real estate market.

“With so many real estate agencies claiming to be ‘the best’ and brands popping up all over the place, it can be confusing for sellers and buyers when it comes to choosing a name they can trust.

“Our story is transparent; we’re local, we have a fantastic team of professionals and we are WA’s best.

"There is still very much a 'choose local' trend happening in WA, so I think the message behind the ad is quite relevant.”

“I think there is no bigger stage than the television screen for telling our story and it has been a great experience,”, says Dea. 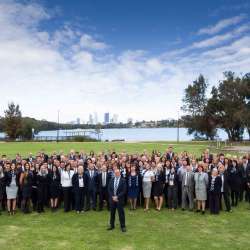