That was nine years ago. His ascent to film stardom has been somewhat slower and today - poised on the brink of tentpole-size fame - he believes it was worth the wait.

“I probably wasn’t ready for it when I was younger,” observes Hunnam, 37, when I meet with him and director Guy Ritchie, 48, to discuss their movie, King Arthur: Legend of the Sword.

There’s been many versions of Camelot’s King Arthur, his magical pal Merlin and mythical sword Excalibur. As lads, they both lapped up the folklore although none more than Hunnam whose favourite childhood pastime was to whittle swords from wooden sticks and play-act as king.

That he gets to do it for real now is a surreal pinch-me moment.

“I’d make a sword whenever I was walking in the countryside, picking up sticks and then cutting it with my pen knife as boys do, you know, then trying to stab my brother with it,” he laughs.

Naturally, the first person he called about the King Arthur role was his mum Jane.

“My most profound creative ally from the family side is my mum and she remembered very acutely how impactful the excalibur was; it ignited my imagination not only in storytelling but as a catalyst and inspiration in my own little journey. And then - 30 years later - I’m playing the man himself,” he says as we chat at his New York hotel, his slim muscular physique swathed in tight jeans and black knit sweater; a week’s worth of facial stubble doing little to disguise his identity as the Next Big Thing.

Not that his success can be characterized as being of the overnight nature. Just 18 when he won his first major TV role on Queer as Folk, playing a 15-year-old schoolboy, there followed a steady stream of work appearing in critically acclaimed movies Cold Mountain, Children of Men and Nicholas Nickleby before tasting the big Hollywood machine in Pacific Rim.

Then of course came the game-changer. He did the unthinkable. He turned down the role of Christian Grey in Fifty Shades of Grey. Citing scheduling conflicts with Sons of Anarchy he walked away from the role that half of Hollywood was heavy breathing over.

It wasn’t an easy decision. “Looking back, the lesson I learned was that if its this hard to make a decision, the answer should be no.”

Instead, he shed 25lbs to play The Lost City of Z’s starving British explorer Percy Fawcett, a man in search of an unknown civilization who vanished in the Amazon jungle in 1925, before reporting for duty on the King Arthur set.

Richie’s Arthur, he soon discovered, was very different to the versions from his childhood where the noble king would undertake a heroic journey to save his people.

This Arthur would be a selfish scoundrel, raised in a brothel and wanting nothing to do with his birthright.

“Guy gave me a very specific mandate at the beginning of the film which was we have to have fun everyday because if we are having fun then we will be making a fun film that is going to be accessible and enjoyable. So we just set out to have fun and I did have the most fun I’d ever had working on a film.”

A stranger to Ritchie’s easy-going process, he initially struggled for direction. “It’s very difficult to pin Guy down before the day if you have a question about something that’s maybe two days away. He kind of looks at you and says, ’Why are we having this conversation now? We’ll figure it out when we get there’. I can be a little overly precise and planning shit, so it forced me to be a bit more fluid which was liberating.”

Ritchie, who has been sitting silently, smiling to himself, suddenly adds, “I always think men understand the frequency of other men, no matter where they come from. Culture, class, creed or colour is irrelevant; they get one another’s jokes and they just crack on. That’s what I’ve tried to do with Arthur.”

Just as in this new hardscrabble take on Arthur, Hunnam’s own childhood has been portrayed as rough; his parents’ divorcing when he was two years old, his late father described as a gangster. The clichés didn’t used to bother him although today he sets the record straight and is even planning to write a screenplay based on his father’s life as a sometime scrap metal merchant.

Born in gritty Newcastle in Britain’s north-east, he later moved to the genteel countryside of Cumbria following his parents’ divorce.

“Yes, it was rough, it’s working class, salt of the Earth but I don’t feel like I had a rough childhood at all,” he says. “It was much more of a community feeling of kids with shitty trainers and holes in their jeans, riding their BMXs in the yard. It wasn’t like the ghetto. I had a very artsy mum and aunt and my maternal grandma was the premiere portrait artist of Newcastle.”

Perhaps searching for stability, Hunnam would hastily wed fellow actress Katharine Towne when he was 19 years old, their union lasting less than two years. Reluctant to wed again, he has dated jewelry designer Morgana McNellis for the past 12 years.

When you ask him about his curious choice to avoid the Twitterverse or indeed Instagram and Facebook, he smiles mysteriously. “I’m baffled by the whole thing. To me it seems like trying to fill up these gaping holes that we all have in us.”

King Arthur: Legend of the Sword is out  on May 18. 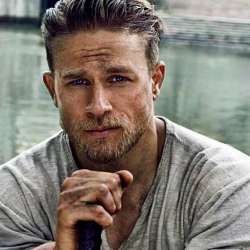