This month our intrepid adventurer Anna Hartley flexes her musical muscles and learns how to play the harpsichord.

Lillian’s apartment is the kind you can find all over Paris.

It has one small room with a mezzanine platform for a bed, and a tiny kitchen and bathroom tucked under ancient wooden beams. Sun streams into a room with overflowing bookshelves and posters hanging on the wall. With a laundry basket in the corner, and a steaming mug of hot coffee next to a laptop, it looks like a typical twentysomething’s inner-city apartment.

Except for one thing.

Le Rouge stands against the wall, taking up almost its whole length. He is smaller than I imagined, delicate even, built from acacia wood and painted a dark warm red.
Le Rouge is only 17 years old, but belongs to a family that can trace its roots back to the middle ages. He has lived his whole life in France, but travels frequently to perform on lit stages.

Le Rouge is a harpsichord and we are going to get to know one another.

This beautiful and relatively rare instrument was widely played during the Renaissance and Baroque periods until its cousin, the piano, pushed it off the main stage. I’ve never seen one in real life before, but my good friend Adam is a player and teacher, and his friend Lillian has one of her own.

I sit down on the padded stool and rest the tips of my fingers gently on the wooden keys, polished with use and age. It feels a little like a piano, except the colours of the black and white keys are inverted. There are also two rows of keys, and it is much smaller than a piano.

Having a harpsichord at home seems a bit like having a bi-wing plane in the garage or using a steam locomotive to get to work, but Le Rouge is actually pretty unassuming, measuring only 90cm wide at the playing end, and 2.45m long.

Lillian raises the lid, and I see the shiny strings, taut and delicate, lining the body of the instrument which stretches away, the bentside curving to a point like the waist of a woman lying on her side.

The words violin, harp, grand piano all spring to mind.

My hands hover below a elaborately decorated wooden panel that bears the name of the builder, Philippe Humeau, and the year 1999. The whole instrument is covered in elegant and intricate black and white paper design.

Every harpsichord is different, and more like a living creature than a machine. Made by hand by one or sometimes two artisans, they reflect the styles of their time and place in history, as well as the individual preferences of their maker. There is no such thing as a “standard” model, and Le Rouge is a modern harpsichord based partially on German models from the 18th century.

I press down a key, which functions exactly like a seesaw. As one end goes down, the other goes up, pushing up a small vertical piece of wood, the “jack” sitting on the end. Near the top of the jack, a tiny bit of plastic called a “plectrum”, the size of a child’s fingernail pokes out of the side. As the jack goes up, the plectrum presses against, then plucks the string above it. A note is played.

It’s a ting, a pling, a thring and a ding. It’s a smaller sound than a piano, and even these few notes sound as if they come from another era altogether.
It feels strange to be sitting in this modern room. I should be wearing a huge silk dress with a corset and basket hoops, like the woman on the cover of one of Lillian’s music books plucking away elegantly at the keys.

Two teachers hover at my shoulders, and we play with individual notes for a while; testing how to let the note ride, or muffling it immediately with the damper which is above the plectrum.

I experiment holding the key near the point of the pluck, making the note slowly or fast.

When we move to scales, I incy-wincy-spider my fingers up and down the keys, playing them fast and slow, separately, or transitioning smoothly between them and letting the sounds overlap. Scales I can handle, but when we move onto chords my hands begin to feel sluggish and unco-operative. I have to concentrate hard to get both hands and all 10 fingers to do what I want, when I want them to, and can only manage it for brief periods. Occasionally I’ll focus too much on one hand, and leave my left pinkie pressed down on a key well after the note has finished sounding.

After more than two hours at the keys, Lillian mercifully takes my place.

Her hands fly over the keys as she plays us two different pieces by composer Domenico Scarlatti, who lived between 1685 and 1757.

One of the quirks of the harpsichord is that they cannot be played “loudly” or “softly”. Each note has a fixed volume, but expert players like Lillian and Adam create the illusion of volume with different techniques like “trilling” two keys next to each other and modifying the way they strike each note. The pieces Lillian plays are complex and rich, surprising and funny.

If I felt the desire to wear a period dress before, I feel transported now. The small apartment disappears and suddenly it’s the year 1705.

I’m in a green forest with aristocratic ladies and men in green stockings dancing while a boar turns slowly on the spit. I want to sit down and weave a tapestry.

And then, suddenly, it’s over. The last note lingers in the air for a few seconds, then is gone, taking with it the forest, the boar, and the dresses.

If you’d like to learn how to play the harpsichord, contact Stewart Smith, at .(JavaScript must be enabled to view this email address). 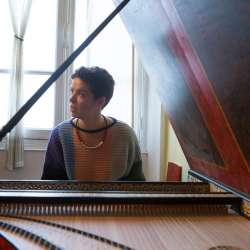 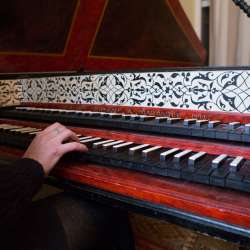 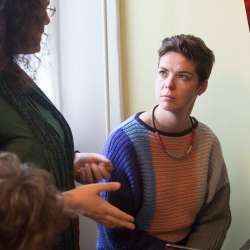 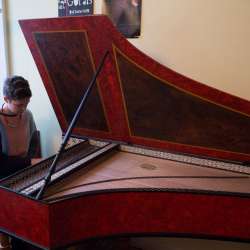